Nepal Wildlife: Pat on the Back

The internationally renowned New York Times compared Nepal’s laudable efforts to the grim picture of South Africa and Kenya and said that the countries suffering from poaching should take an example from Nepal. 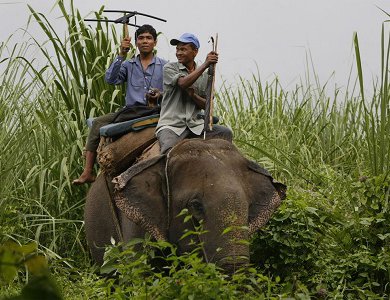 Amidst all the internal turmoil and chaos in the country, the Nepalese wildlife sector has something to write home about. Earlier this month Nepal commemorated the World Wildlife Day by declaring that the year 2013 was a zero poaching year. At a time when African wildlife giants Kenya and South Africa are battling hard to control the ever increasing wildlife trade, Nepal’s record has provided an exemplary picture.

However, this is not the first time the country has produced such an amazing feat. Nepal recorded zero poaching in 2011 and just one such case was recorded the following year. According to a report in 2011, Nepal was home to more than 500 one-horned rhinos, an increase of more than 100 in three years time period. It’s conservation efforts have yielded remarkable results for another endangered species, the tiger, whose current estimated population in national parks have shot up from a little more than 100 in 2009 to nearly 200 in 2013.

Thanks to a strategic partnership between the park agencies, national law enforcement officials and the local communities, the anti poaching effort has garnered praise not only at home but abroad also.

The internationally renowned New York Times compared Nepal’s laudable efforts to the grim picture of South Africa and Kenya and said that the countries suffering from poaching should take an example from Nepal. It states that the country’s unique approach has been involving local communities in the conservation process. "Nepal’s government gives 50 cents of every tourism dollar it collects to communities near wildlife preserves, making animals worth far more alive than dead to both local citizens and the country as a whole", it said.  Poaching often involves a network consisting of local communities and forest guards, who are rewarded with hefty amounts for their involvement. "Eliminating demand by policing buyers and dealers, as the United States is trying to do in the case of elephant ivory, is of course an essential part of any effort to put wildlife criminals out of business. But Nepal’s example shows that much can be done at the source," it said.

The National Geographic had also words of acclaim for Nepal's zero tolerance against wildlife crime. With support from international organizations such as the Interpol’s Wildlife Crime Working Group, Nepal has destroyed many notorious poaching networks. More than 700 poachers and their associates  were arrested last year. Referring to the tough stance taken against poachers, the National Geographic quotes John Sellar, former enforcement Chief of Convention on International Trade in Endangered Species of Wild Fauna and Flora (CITES) as saying, "Nepal's forest law, which empowers district forest officers and chief wildlife wardens to deal with offenders and impose prison sentences of up to 14 or 15 years, means that any poacher who is caught can expect to be dealt with much quicker than in other countries."

The international laurels for Nepal’s early initiatives to combat the lurking danger should prove a big incentive to those involved in the conservation who have a tough task ahead given the geographical odds. As the National Geographic said, "Nepal’s location - between China to its north and India to its south, east, and west - places it at great risk for trafficking. But it has already sought to employ the Wildlife and Forest Crime Analytic Toolkit and collaborate with the International Consortium on Combating Wildlife Crime (ICCWC) to strengthen its approach to wildlife crime”.

Nepal Airlines Plane Took Off For Brisbane With Stranded Australians And New Zealanders By NEW SPOTLIGHT ONLINE 2 days, 4 hours ago

The Local Effects And Security Response To Coronavirus By Binoj Basnyat 3 days, 11 hours ago