The double standards shown by countries in the Crimean crisis should also offer a crucial lesson for Nepal. 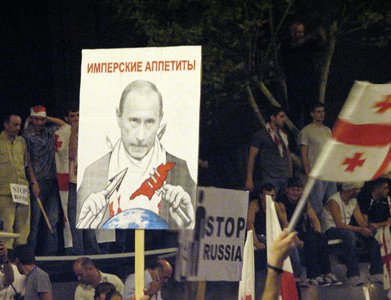 Describing his move as a ‘correction of past injustice’ and a response to ‘Western encroachment’ upon Russia's vital interests, Russian President Vladmir Putin signed a treaty annexing Crimea, a strategically important peninsula in the Black Sea. Crimea’s annexation followed a referendum in which more than 95 per cent of the population of the peninsula, majority of whom are Russian speakers, favored a merger with Russia. The move predictably invited strong criticisms accompanied by strict sanctions against Russia from the West. Many have labeled it as the beginning of a new ‘Cold War’.

After gaining its independence from the communist USSR in 1991, Ukraine has constantly been an ideological battleground for the West and Russia. The 2004 Orange Revolution and the recent political uprising against President Viktor Yanukovych are examples. Both the sides have particularly banked on the internal standoff between the country's pro-Russian eastern half and its more Westernized west. Famous Harvard political scientist Samuel P. Huntington had even referred to the country as ‘cleft country with two distinct cultures’. The annexation of Crimea was just a boiling point in the conflict.

This is however not the first incident of a blatant power play against a smaller and weaker country. Time and again many nations have acted against their ideology to benefit their national interest. Although the United States (US) has lashed out at Russia for ‘violation of international law, its assault on Ukraine’s sovereignty and territorial integrity’, it was the same US which led to the forceful separation of Kosovo from Serbia without paying any heed to the country’s sovereignty. Political scientist and international relations expert Brahma Chellany writes, “International law tends to take a back seat when a major power asserts a right to protect vital security interests. The Ukraine case illustrates the international law of convenience”.

Given that nations can act out of will to protect their national interest, Nepal’s sovereignty and integrity stands at a great risk. This is more so considering what critics have called expansionist and interventionist nature of our neighboring countries. Their recent histories have shown that  terms such as ‘territorial integrity and sovereignty’ are nothing more than empty rhetoric when it comes to politics. Sikkim and Tibet are cited as examples. Although India had promised a special protectorate to Sikkim after its independence, the tiny independent country was annexed in 1975 after fears of Chinese intervention in the matter. On the other hand, China’s annexation of Tibet in 1951 needs no description. Time and again, it has also claimed parts of the Indian state of Arunachal Pradesh underlining what many critics say as its heavy expansionist policy.

Following President Putin's telephone conversation with his American counterpart Obama, there has been indications of a thaw. Although no breakthrough was achieved in the Paris meeting between foreign ministers Lavarov and John Kerry, Russia reportedly moved some of its soldiers away from the borders with Ukraine. However the threat of the outbreak of a full-fledged global conflict has not subsided yet. Whether the worst fears come true or not, the Crimea annexation gives big lessons for small countries characterized by political instability, ethnic diversity and most importantly geo-political rivalries. Nepal is one of them.

Although Ukraine and Nepal do not share close diplomatic relationship, they share a lot of similar traits in terms of their ethnic diversity, strategic location and geo-politics. Sandwiched between two emerging superpowers, Nepal also faces a difficult geo-political challenge. The consequence has been greater political instability, ethnic divisions and demands for autonomous regions in different parts of the country. Amid the fast developing dramatic political developments following the regime change, both countries have intensified moves to exercise their influence even more. This was as much reflected in the UN vote on declaring the Russian annexation of Crimea illegal. A yes vote for the resolution would have been a natural choice for Nepal whose two big neighbours are found fault with for annexing their once independent small neighbours. But instead of joining the 100 countries who voted for the West-initiated resolution, Nepal sided with India and China in joining the 58 countries who abstained in the vote.

Given its vulnerable geographical location and the past history, a proxy war between the two neighboring countries in Nepal is never ruled out. Nepal should realize that ethnic divisions and the resulting political upheaval in the country provides a perfect ground for neighboring countries to pounce upon.  So it becomes imperative for Nepal to maintain political stability. The Crimea annexation might have never taken place had there not been political uprising in Ukraine. In the background of increasing political tensions, Nepal should realize that until and unless it maintains strong political unity, sovereignty and integrity of nations like itself remains at big risk.

The double standards shown by countries in the Crimean crisis should also offer a crucial lesson for Nepal.  A regular characteristic of all superpowers and rising superpowers have been their expansionist policy. As Chellany writes, “When a great power needs a threat to justify its intervention in another state, it invariably finds one”.  Nepal should also comprehend that given political adventure of the mighty  powers, even international organizations such as the UN cease to be effective.