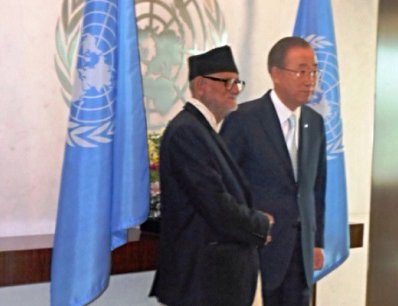 Although the bill was passed unanimously by the Legislature Parliament last month, the United Nations has raised serious objections over certain clauses of the act. UN experts warn that the act risks further entrenching impunity.

At a time when Nepal government has been completely ignoring objections by rights activists at home, the recent call by UN experts is likely to put further pressure on the government. Nepal government, however, defends the act. "There is no such provision that gives amnesty to all," minister of Law and Justice Narahari Acharya said. "The government recognizes the concern shown by the international community."

Despite the assurance of the government and political parties, an Adhikari couple is still sitting hungry in protests demanding a probe commission in the killing of their son Krishna Prasad Adhikari by Maioists. Although Nepal's rights activists and government took up the matter in the initial stage, all have remained mum now and nobody knows the fate and health condition of the Adhikari parents.

Similarly, there are also growing concerns expressed by the families of people who were forced to disappear. During the more than ten years of conflict, over 15,000 people were killed and a large number of people got injured.

A group of UN human rights experts today called on the Government of Nepal to amend the new legislation allowing for amnesty in case of serious violation of human rights and humanitarian law. The experts expressed deep concern that the recently adopted truth-seeking law leaves mass violation unaddressed.

“Amnesties for these atrocities would convey to Nepalese society that some people are above the law,” the experts stressed. “Indeed, the legislation which should enable the country to come to terms with its past, may further entrench impunity.”

The Act establishing the Commission on Investigation of Disappeared Persons, Truth and Reconciliation authorizes it to recommend amnesty for mass violations. The Commission is tasked to inquire into the killing of several thousands of people during the 1996-2006 conflict in Nepal, the 1,300 still missing, among other violations.

“Amendments should be adopted only after appropriate consultation with victims, families of victims, civil society and the National Human Rights Commission,” the experts added.

The experts drew particular attention to the ability of the Commission on Investigation of Disappeared Persons, Truth and Reconciliation to initiate reconciliation processes in the absence of a request by the victim or the offender. “Reconciliation at the social level is not a matter of one-to-one encounters – especially if these are not requested – but of establishing trustworthy institutions that genuinely embody the idea that victims, and indeed all individuals, are rights-holders,” they said.

"Violations of this magnitude not only constitutes violations of the rights of each of the victims, but a violation of the very principle of the rule of law”, the rapporteurs said. “Individual agreements, usually reached under pressure and frequently in situations of physical insecurity, blatantly fail to address the systemic and structural dimension of these violations.”

The experts also highlighted the fact that selection and appointment of members of the Commission on Investigation of Disappeared Persons, Truth and Reconciliation must be clearly defined by law and be conducted in a transparent fashion. “Lack of transparency in the selection process raises questions about the autonomy and legitimacy of the Commission from the outset,” the experts underscored. “For Nepal to come to terms with its past, the Commission needs to be independent.”

Recalling that various independent fact-finding and monitoring mechanisms of the Human Rights Council (Special Procedures) have been in contact with the Nepalese authorities on these issues since 2012, they noted: “We encourage the Government of Nepal to avail itself of the advice of the High Commissioner for Human Rights.”

The experts also reminded the Government of Nepal of the pending requests of 14 Special Procedures mandate holders for country visits and encouraged the authorities to engage with them in light of their responsibility to build a peaceful and rule-of-law-based society.

EP DELEGATION Visit For Cause By A Correspondent 4 days, 20 hours ago