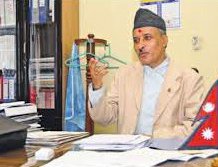 Although the government dismissed the news report of removing the current chief secretary Leela Mani Paudyal from his position, it has already badly rocked Nepal’s civil service, which has been passing through frequent political interventions.

“It is a baseless rumor circulated in the media. We don’t have any intention to remove the chief secretary,” Minister of Information and Communication Dr. Minendra Rijal. “Don’t disseminate the baseless news.”

After being appointed the chief secretary during the time of Prime Minister Dr. Baburam Bhattarai, Leela Mani Paudyal has alredy worked with the previous care-taker government led by chief justice Khil Raj Regmi and present government.

Despite his competitors Shanker Koirala and Uma Kanta Jha, who tendered resignation expressing disenchantment over Paudyal’s appointment, were appointed as ministers of finance and energy, chief secretary Paudyal was able to maintain distance and survived almost year.

“As a cabinet secretary, Paudyal endorsed the cabinet decision of promotion. He later opposed the same decision as a member of committee of Public Service Commission,” said sources. Even some ministers belonging to Nepali Congress are unhappy with the way chief secretary is working.

Hinting possible scenario, Kishore Shrestha, editor of popular vernacular weekly Janastha wrote in Vibor, “There is a making of another court massacre in civil service by victimizing an honest and efficient Chief Secretary Leelamani Paudyal.”

Whether one likes it not, the rumors about removing chief secretary Paudyal have already rocked the civil service. Prime minister Sushil Koirala, who is returning from his month long cancer treatment on July 23, is reportedly in favor of retaining Paudyal as chief secretary.

Binod Chaudhary Distributes Large Quantities Of PPE And Other Protective Materials To Hospitals In Nepal By NEW SPOTLIGHT ONLINE 2 days, 23 hours ago