Nepal has celebrated 58 years of establishment of diplomatic relations with Russia. 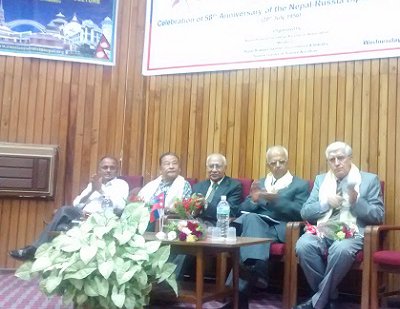 From cold war to globalization, Nepal and Russia have seen many changes in the course of their 58 years of diplomatic relations. From dissolved Soviet Union to now Russian Federation, Nepal-Russia relations have gone through a series of change.

One of the common and regular characters of Nepal-Russia relations is that it is stable all the time. Whatever the political changes, Nepal and Russia have maintained their friendly relationship all the time.

Speakers expressed these views at a function organized by Nepal Russian Friendship and Cultural Association, Mitra Kunj and Nepal Russia Chamber of Commerce and Industry to celebrate 58th anniversary of establishment of Nepal Russia Diplomatic Relations.

“The contribution made by then Soviet Union by providing technical education to Nepalese has great importance in the overall development of the country. As Nepal needs direct foreign investment to uplift the economy, we want to see more Russian investment in Nepal in the coming days,” said Dr. Bhattarai.

Russian charge d’ affairs Valery Anichkin said Russians are ready to provide support to Nepal’s all-round development. “The sooner Nepal will complete its transition process, the better for Nepal. Russia hopes that Nepal will promulgate the new constitution by January 2015 paving the way for a better future for Nepal."

Former Nepalese ambassador to Russia Hiranya Lal Shrestha stressed the need to intensify the engagement with Russia in the context of establishment of BRICS.

Deputy Director of Russian Center of Science and Culture Anon Maslov said that the center would continue to organize the program to strengthen relations between the two countries.

Nepal established its diplomatic relations with Russia in the midst of cold war. After the establishment of the relationship, Russia provided valuable support to Nepal in highway construction, hydropower, cigarette factory, sugar mill and agriculture tool industry, turpentine industry and hospital.

After the dissolution of Soviet Union, Russian support to Nepal has drastically declined. However, Russian private sector has shown interest to invest in Nepal.