POLITICS: Beyond The Borders

Nepal's quest for a new constitutional order faces the geo-political challenges it is less likely to overcome on its own. 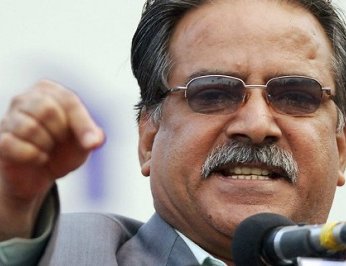 What had long been discussed in private has now been made public. And it is none other than the man who is known to blow the whistle for personal or partisan interest. He did it when he was leading a gun wielding outfit in the jungles. And when he was sitting the seat of power at Singh Durbar.

The man is Pushpa Kamal Dahal. The former guerrilla leader and former prime minister and presently the main opposition leader has talked about the geopolitical challenges of the constitution-making process. Not in the closed-door chat, but in a press conference at his residence. He said that taking the neighbours' concerns into account is no less important than addressing the aspiration of the Nepali people.

Having chaired the first meeting of the high level political mechanism, however, Dahal expressed doubts if the CA can meet the January next's deadline to make the new statute. He even went as far as to suspect that a move is on to derail the entire process so as "to deny the country a progressive constitution of the people's aspirations." His main target of  attack was the Nepali Congress (NC) which had only the other day floated its model of federalism consisting of  six/seven provinces which it said was presented keeping into consideration regional interdependency, economic and administrative viability and population. Its junior coalition partner United Marxist Leninist (UML) was very closer to the model.

Many commentators have pointed out that the small number of provinces envisaged by the NC is its positive aspect compared to other models offered by some other major parties. Another major highlight of the proposal is the equitable distribution of resources and to maintain a balance in the distribution of population among the provinces.

With the official proposal of the largest party in the Constituent Assembly, the debate on federalism was  further expected to heat up. The UML had already proposed a similar federal model.  The main opposition CPN (Maoist) and Madhes-based parties had stood for 10 or 14 states but they said they were open to be flexible. The Maoist party that Dahal leads was seen not very averse to the proposal except that it did insist more on identity and that the focus on identity would require more provinces to be established than had been proposed by the Nepali Congress and the UML.

But the real challenge lies somewhere else became evident when Dahal told reporters that both India and China have their respective stakes in Nepal's proposed state-restructuring. While India is sensitive about the shape, form and the number of provinces in the southern border plains China is categorical that there should not be many provinces in the northern border hills.

But a top Nepali leader, whose role is considered crucial in making the new constitution, would go public and hint that the geo-political challenges could prove an impediment to the kind of the constitution Nepali "aspire" for is something new. This could mean the realisation on the part of all the key leaders and the parties they represent that the statute-making process is not in the hands of the Nepali actors alone although Dahal, like many other leaders, said that the decision has to be taken ultimately by the Nepali people themselves.

If anything, the latest Dahal remarks point to the fact that the fate of the future Nepal, with a new constitution or without it, will largely depend more on what they think in Delhi and Beijing than on what we do in Kathmandu.