Without a credible assurance for future power sharing, the opposition-led alliance is unlikely to allow the ruling parties to promulgate the new constitution by January 22, 2015 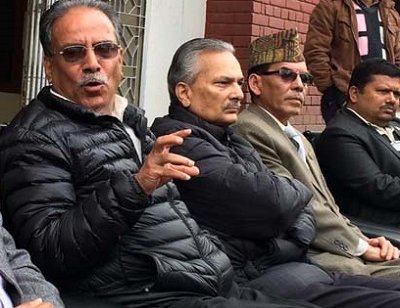 They are holding meetings almost daily. All these meetings end in an elusive search for a common ground for the promulgation of the new constitution. Having a formidable presence, with a two-thirds majority in the Constituent Assembly, the Nepali Congress and CPN-UML alliance is to promulgate the new constitution.

However, the UCPN-Maoist alliance, including the Madhesh parties, have a different priority. They are much concerned about their role in the future power structures. The Maoist alliance believes that allowing Nepali Congress and CPN-UML to promulgate the new constitution means accepting their hegemony in power game in the future.

This indicates that the current political deadlock is a result of power sharing rather than the agenda of provinces, forms of government and judiciary. “In constitutional negotiations, we can manage through give and take. However, we will not allow Nepali Congress and CPN-UML to be in power on our agenda of republic, secularism and federalism,” said Sharma.

Although the question of power sharing is a stumbling block, leaders of political parties are harping on the idea that they would promulgate the new constitution by January 22, 2015.

As a political consensus on the thorny fundamental issues is unlikely any time soon, leaders are floating the idea to amend the calendar of operation and postponement of the deadline.

In a three-party meeting on November 16, UCPN-Maoist leader Prachanda also proposed an agenda for the amendment of calendar of operation to pave the way for postponement of the date for the promulgation of the constitution.

The leaders of ruling parties, including Prime Minister Sushil Koirala dismissed UCPN-Maoist leader Prachanda’s suggestions outright, stressing the need to promulgate the constitution on the stipulated date of January 22 at any cost. As UCPN-Maoist-led 22 parties have already made it clear that they would not allow holding the CA meeting without consensus agenda, the ruling parties will have limited options.

In a situation when UCPN-Maoist led alliance has threatened to use force, if necessary, to bar NC-UML proposal from entering the Constitutional Political and Consensus Committee (CPDCC), it is Herculean task to go alone.

“If chairman Bhattarai continues to take the committee hostage, we will need to dismiss him and nominate another chairman on the basis of seniority,” said Nepali Congress leader Ram Chandra Poudel. “There must be a constitution by January 22 at any cost.”

Out of 71, 43 CA members of NC, UML and other fringe parties submitted their signatures expressing stern anger for failing to hold discussions on the proposal within the committee and not forwarding it to the CA.

“As time is running out, we will be unlikely to see the new constitution by January 22. If ruling Nepali Congress and CPN-UML are honest, they should call a meeting for the amendment of calendar of operations,” said Upendra Yadav, leader of Madheshi Janadhikar Forum Nepal (MJF-N).

As the blame game is on, the 22-party opposition alliance led by UCPN (Maoist) has decided to hold an interaction with Nepal-based foreign diplomats ahead of the SAARC summit on the ongoing statute drafting process. A meeting of the UCPN (Maoist)-led Federal Republic Front (FRF) decided to meet the diplomats to counter the ´allegations made by ruling parties.

As the deadline is also a link to the life of the government led by Prime Minister Sushil Koirala, it will intensify the power struggle with CPN-UML – which claims the government after that.

However, Koirala has made it clear that he will resign even if there is no constitution. In this case Koirala needs to make a new arrangement with CPN-UML or to negotiate with UCPN-Maoist for another new alliance. This will further intensify political instability in the country.

After the political change of 2006, Nepal has gone through a prolonged phase of political instability, rocking the government institutions, including bureaucracy, security agencies and other social order. As Nepal’s political instability and disorder has no sign to die, the concerns of Nepal’s neighbor India, and to a lesser extent China, are growing.

In case political parties fail to institutionalize Nepal’s transformation from monarchial Hindu to Secular, Federal Republic soon, one cannot rule out the emergence of a new political power for a brief period to fill the power vacuum. Power abhors vacuum.