Given that South Asia is increasingly becoming a centre of global geopolitical games, with the new super power China too 'eager' for a full SAARC membership and another power-in-the-making, India dead against it, there is little chance, if at all, t 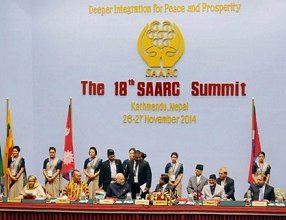 Pakistani prime minister Nawaz Sharif shook hands with his Indian counterpart Narendra Modi at the Dhulikhel. That did not make headlines because nobody knew it except the two men and the six other heads of state and government present there. But the footage of the smiling prime ministers of the mutually hostile South Asian countries were on almost every major channel the moment they shook hands and exchanged pleasantries at the closing ceremony of the 18th edition of the South Asian Association for Regional Cooperation (SAARC). The 30-second event was the 'highlight' of the 48-hour regional show in Kathmandu. It was seen as a moment that salvaged the Kathmandu SAARC summit.  But hours after that headline-grabbing few seconds, sound of gunfire was heard in the disputed Kashmir territory near the border between the two biggest members of SAARC. Indian home minister blamed the violence coming as it did on the eve of the state elections of Jammu and Kashmir, on "encouragement" from across the border.

As it turned out, predictably enough, the Modi-Sharif handshake hid more than what it showed. There is simply no reason to believe that India and Pakistan are anywhere near closing their long-running differences. True, they are not on not-seeing-eye-to-eye terms. (In fact, only six months ago Nawaz Sharif had covered the Islamabad-Delhi journey to attend Modi's swearing-in ceremony which was also incidentally followed by the cancellation of the secretary-level meeting between the two countries after the Pakistan embassy in Delhi played host to Kashmir's Hurriyat leaders for what Pakistan claimed was a normal meeting what had happened in the past also)  But the two hostile South Asian neighbours have a lot to traverse  before the regional organisation that they are member of can even begin move.

Not surprisingly, the Kathmandu SAARC summit did produce nothing to show except the customary rhetoric and yet another long list of fresh pledges contained in a bureaucratically-worded document. With the summit almost certain to draw a blank the leaders decided that there has to be something that can been seen  to have salvaged the meeting of the executive chiefs of the eight countries. Thus came the agreement on energy cooperation. But there had been countless agreements in the past documents of which have been lying in the dust. South Asian Free Trade Agreement (SAFTA), for instance, had been there since long, but the trade between the member countries has not even touched the double digit of their total trade. Prime minister Modi did mention this in his speech on the first day of the summit, but as it turned out the SAARC failed to address this. The failure on moving other proposed agreements -- on road and rail links --  forward had been lamented, but there is no ground yet to believe that progress would have been made even if  these agreements had been signed.

As long as the SAARC remains hostage to mutual mistrust and suspicion capped by the uneasy India-Pakistan relations, the organisation for regional cooperation will remain a body for regional confrontation. And given that South Asia is increasingly becoming a centre of the global geopolitical games,  with the new super power China too 'eager' for a full SAARC membership and another power-in-the-making, India dead against it,  there is little chance, if at all, that the region will witness any substantial progress on regional cooperation to the mutual benefit. The 18th SAARC had Deeper Integration for Peace and Prosperity as its theme/motto. If the past is any indication, the rhetoric has been matched either by inaction or reaction. There is no indication that the future will be any different.

Nepal can take pride in having successfully hosted the SAARC summit for the third time, but there is absolutely nothing to be proud for the SAARC members of the outcome of the eight-nation meet.  Shaking hands for 30 seconds is a far cry from meeting the hearts and the minds that can last years in a region which has much deeper disconnectivity than the integration.

A Massive Funeral Held For Woman Shot During Myanmar Protest By Agencies 3 days, 15 hours ago

Australian PM Is Vaccinated As Rollout Begins By Agencies 4 days, 13 hours ago

Biden Urged China To Compete In Accordance With Global Economic Rules By Agencies 5 days, 15 hours ago