Chinese companies are making investment in various sectors of Nepal 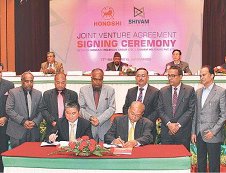 At a time when Nepal is in desperate needs for foreign investment in industrial and hydro power sector, Nepal’s two neighbors India and China are vying for a share of contribution. Showing willingness to invest in 700 MW West Seti Project, China’s largest Three Gorges Company has also shown the interest to invest in other sectors.

A visiting high level delegation of China’s Three Georges Company has made it clear that they are willing to invest in other sectors, including the industries based on local raw materials.

During the visit to Nepal, the delegation also held talks with high level officials of Ministry of Energy and managing director of Nepal Electricity Authority. China Water and Electric (CWE), a subsidiary of Three Georges , is constructing 700 MW West Seti Project.

According to finance minister Dr. Ram Sharan Mahat, the delegation requested the government to settle the PPP, rehabilitation and transmission and land acquisition issue before the signing of final agreement.

Nepal and China are celebrating sixty years of establishment of bilateral relations, high level visits from both the countries are likely. Nepalese president Dr. Ram Baran Yadav is paying visit to Bao Conference in China.  Similar visit is expected from China in the coming days.

As Nepal is in desperate need for infrastructure development,  the Government of the People's Republic of China has agreed to provide a grant assistance of RMB 800 million (approximately Rs 12.83 billion) under the economic and technical cooperation.

The northern neighbor has agreed to provide the grant assistance for marking the sixtieth years of cordial and friendly diplomatic relationship between Nepal and China.

The main objective of the assistance is to support Nepal's economic development by implementing the mutually agreed development projects covering various sectors, including infrastructure development. This cooperation will be utilized in the development programs as agreed by both governments.

It will be implemented in a continuous basis from the fiscal year 2015/016. The sectoral ministries of the government of Nepal will be the implementing agencies for the projects under this grant assistance.

The agreement was signed in Kathmandu by Finance Secretary Suman Prasad Sharma and Wu Chuntai, Ambassador of the People's Republic of China to Nepal, on behalf of their governments in the presence of Minister for Finance Dr Ram Sharan Mahat.

Speaking at the ceremony, Finance Secretary Sharma said the two countries enjoy cordial and friendly diplomatic relationship for long and added that the grant was the highest grant assistance made by China so far. He expressed sincere appreciation to the People's Republic of China for this grant assistance and for its continuous support to the socio-economic development of Nepal.

On the occasion, Chinese Ambassador Wu said China wished to see Nepal moving towards political stability and lasting economic development and also expressed the confidence that the socio-economic, cultural, and diplomatic ties between the two countries would be strengthened in the days ahead.