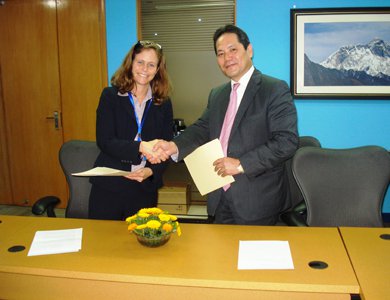 The U. S. Agency for International Development joined the Multi-Donor Trust Fund (MDTF) for Public Financial Management (PFM) today. The Administrative Agreement was exchanged today between the World Bank Country Manager for Nepal, Takuya Kamata and USAID Mission Director Dr. Beth Dunford for the amount of US$712,575.

The contribution shall be used to finance activities under the Multi- Donor Trust Fund, which is administered by the World Bank and jointly funded by six donors: the European Union (EU), UK Department for International Development (DFID), the Governments of Norway, Denmark and the Swiss Confederation, and the Australian Government Department of Foreign Affairs and Trade (DFAT). Established in December 2010, the objective of the MDTF is to strengthen the performance, transparency, and accountability of Public Financial Management in Nepal.

“This Multi Donor Trust Fund is a good example of development partners working together to support the government towards reforming public financial management in Nepal effectively using its country systems,” said Kamata. “We are pleased to welcome USAID as our new partner in this collaborative endeavor.”

USAID’s Director Dunford added, “Improving the government Public Financial Management systems, budget execution and delivery of basic services is the most direct path to sustained alleviation of the extreme poverty that affects 25 percent of the Nepali population. I travel to the field often and observe our programs’ coordination with government efforts and with other donors. There’s still work to be done to ensure full integration, but we’re increasingly moving in the right direction, and the MDTF will make that possible.”

According to a press release issued by the World Bank, the Multi-Donor Fund works to strengthen Government of Nepal accounting systems and processes. It was responsible for rolling out the treasury single account (TSA) system to all 75 districts, resulting in the generation of timely budget financial reports reflecting the government expenditures and revenues. It will also pilot the newly designed Revenue Management Information Systems (RMIS) module, preparation of financial statements for two pilot ministries following the International Public Sector Accounting Standards (IPSAS). The MDTF has also continued the support to the Office of the Auditor General (OAG).

The MDTF also works on strengthening the use of social accountability to improve Public Financial Management through awareness-raising on local budgeting, pro-poor and gender budgeting.

BEEN Energy Efficient Building By A Correspondent 9 hours, 32 minutes ago