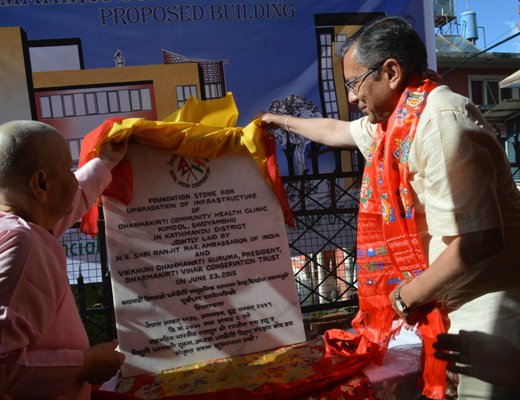 Vikkhuni Dhammawati Guruma gave a recital of the paritran at the function.  Ambassador also paid a visit to the Nirvana Murti Vihar.

The project is being implemented by Department of Urban Development and Building Construction (DUDBC), Kathmandu Nepal Government   in consultation and coordination with Dharmakirti Vihar Conservation Trust.

Dharmakirti Vihar Conservation Trust is a community based social and Cultural Institute of Newar Community in Kathmandu District.   The Health Clinic was established by the Trust in 1998 with the objective of providing health services to the local community of Vikkhus (monks) and Vikkhunis (nuns) and for the local community members. The  upgradation of the clinic infrastructure by constructing of a building of 8 bed capacity, medical wards and  accommodation facilities for outpatient services would provide better health care services to the local community.  The Indian Embassy and Government of India are happy to support such initiatives that fulfil the development needs of the wider community in Nepal.

In addition to this project, 11 projects have been completed with Government of India assistance of NRs 223.2 million in the district.  Also work is ongoing for   11 other projects at a cost of NRs 454.5 million.  India has also provided  38  ambulances, 03 special Medical Vans and 32 school buses for various organizations in Kathmandu.

Nepal Extends Lockdown Until June 14 And Suspended All Flights Till June 30 By NEW SPOTLIGHT ONLINE 23 hours, 41 minutes ago