SIX MONTHS OF EARTHQUAKELonging For Support

As the political instability continues, launching of programs directed at providing relief to the earthquake victims is far from a priority 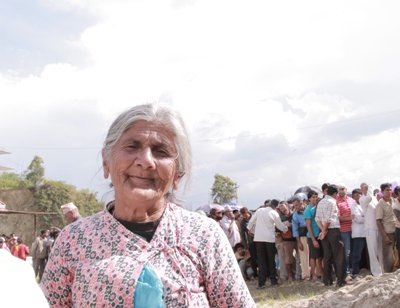 Ram Kumar Glan, a resident of Melamchi Village Development Committee, is yet to get back to his normal routines. He suffered heavily in the catastrophic 7.8 magnitude earthquake of April 25 and subsequent aftershocks.

Glan is living in a temporary shed built with support from one of the INGOs. But he is not alone facing this fate. A large number of rural poor and marginalized communities like Glan have been living in temporary shelters. Although Nepal’s development partners have expressed serious commitments to support reconstruction after the earthquake, the inability of the government to set up the Reconstruction Authority has hampered the process. Due to the disagreement of major political parties on the Reconstruction Authority, the related ordinance missed the deadline and the committee set up by the government expired prematurely.

As the political parties are deeply engaged in internal power sharing and the recent unrest in terai Madhesh has pushed the situation from bad to worse, most of the victims of earthquake are now barely surviving with support from UN, INGOs and NGOs.

With the no hope of getting any further relief from the government, the rural population has already started the construction of the houses on their own and with their own knowledge and skill, meaning these will not be resilient to future earthquakes.

“The calamity has added a new challenge to Nepal’s short-to-medium term economic and development prospects. The risks have been compounded recently by political strikes in various parts of the country. The political strikes prior to and after the promulgation of the new constitution are disrupting production, distribution networks, and external trade. Some political parties are not satisfied with certain provisions in the new constitution, which was passed through a majority vote in the Constituent Assembly, and have been intensifying their protests over the past five weeks,” writes economist Chandan Sapkota in Asian Development Bank’s Blog.

“The delay in getting earthquake reconstruction activities off the ground due to legal and operational hassles is likely to hit industrial and services output. Considering these factors, ADB now forecasts GDP growth this fiscal year at 4.8% versus the 5.1% we forecast in March, before the earthquake. That’s still a tad higher than the 4.5% that ADB was predicting in the immediate aftermath of the tremors back in May, given that monsoon rains improved last month and the FY2016 budget was timely and had a number of planned measures to accelerate capital spending."

At a time when the country’s southern part continues to be in a spell of strikes and protests for 55 days, which have disrupted the supply situation, there is a possibility of further economic downslide. “Continued delays in reconstruction work and the intensification of supply disruptions arising from the virtual shutdown of several districts in the Terai and eastern regions may potentially push GDP growth even lower, possibly to between 4.0% and 4.5%,” writes Asian Development Bank’s economist Sapkota.

As earthquakes, followed by recent strikes in Terai-Madhesh, have badly damaged the Nepalese economy, the coming days are likely to get worse as the government is yet to come up with mitigation activities.

“The overall damage and economic losses as a result of the earthquake and the subsequent aftershocks were estimated initially at about $7.1 billion. However, the cumulative need for recovery is estimated at $6.7 billion,” writes Sapkota. “The National Planning Commission’s estimate of the public sector burden, including housing and human settlements, is about $3.8 billion (or about 18% of FY2015 GDP) over the medium term. Total donor pledges at the June reconstruction conference exceed public sector recovery needs, and about half are on a grant basis.”

At a time when the constitution of National Reconstruction Authority, which has to play an important role to accelerate the post reconstruction activities, is uncertain, people like Glan have no way other than to wait longer for relief and reconstruction support or do something by themselves.

NEPAL-INDIA Bonds Across Border By Keshab Poudel 1 day, 2 hours ago

India Open To Engaging With Nepal In An Environment Of Trust And Confidence: MEA Spokesperson By NEW SPOTLIGHT ONLINE 2 days, 14 hours ago