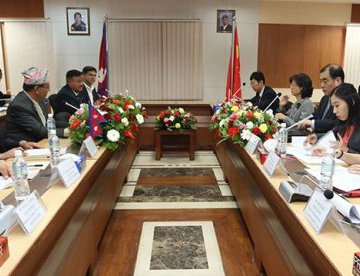 Just a few months after Nepal joined the Belt and Road Initiative, Nepal-China 11th meeting of the Diplomatic Consultation Mechanism concluded with commitments to implement the agreements signed between the two countries.

The meeting also discussed Nepal-China economic cooperation, investment, trade and connectivity along with land and air route connectivity. They also proposed on tourism and socio-cultural exchanges, collaboration on areas of mutual interest in the backdrop of consolidation of the harmonious relations, and conducting regular meetings of other bilateral mechanisms.

Among others, major regional and international issues of common interest were under review in the meeting.

The 10th meeting of Nepal-China Consultation Mechanism was held in Beijing in 2013.

After the meeting, China has agreed to reopen the Tatopani customs point that had remained closed since April 2015 when the earthquakes heavily damaged infrastructure on both sides of Nepal-China border.

With Nepal’s request, the Chinese side has assured Nepal that they are committed to resuming the operation of the Tatopani customs point once the reconstruction of the damaged buildings and road and protection works of the area are completed.

Although the Chinese side has been expeditiously working to reconstruct the damaged infrastructure on its side of the border, not much work has been done yet on the Nepali side . "We told that we are ready to put in place the infrastructure on our part. We are optimistic that the customs point will resume soon," said Foreign Secretary Shanker Das Bairagi, who led the Nepalese delegation at the meeting.

During their visits to China, the then prime ministers K P Sharma Oli and Pushpa Kamal Dahal had asked the Chinese side to reopen the Tatopani-Zhangmu border point. Nepal has also been raising this issue in all other meetings with the Chinese side.

The Joint Consultative Mechanism was set up in 1996 as a platform for discussing the matters of mutual concern and cooperation at the senior officials' level between the Foreign Ministries of Nepal and China. While Foreign Secretary Bairagi led a 21-member Nepali delegation, Assistant Minister of the Ministry of Foreign Affairs Kong Xuanyou led the 12-member Chinese delegation in the meeting.

The meeting discussed ways to promote trade, investment, infrastructure development and people-to-people contact and maintaining the tradition of regular exchange of high-level visits between the two countries.

"The Nepali side expressed hope that cross-border connectivity, infrastructure development, diversification of Nepal's trade, promotion of investment and tourism would receive priority in the implementation of the MoU on cooperation under the Belt and Road Initiative signed by the two sides on May 12, 2017," said the MoFA statement.