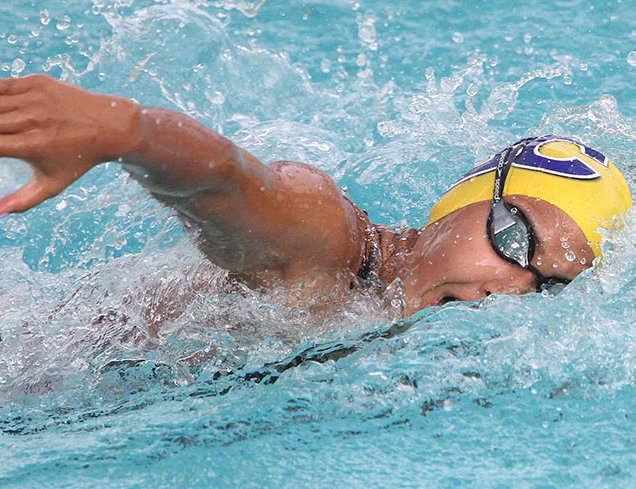 Although sports officials created many hurdles in her participation, the first young Olympian from Nepal, Gaurika Singh has proven that she is strong as she shattered three national records on the final day of the NSA Cup Swimming Championship.

Singh clocked one minute and 0.79 seconds in 100m freestyle heats to better her own mark of 1:1.78 seconds set during the Irish Open Championship held in Dubai last year.  However, she took one minute and 2.03 seconds in the finals. Tisha Shakya of Central Region came second in 1:6.22 seconds and Duana Lama of Nepal APF Club was third in 1:11.31.

Singh took 28.50 seconds in finals to win the gold, while Central’s Tisha Shakya (30.63) and Anushiya Tandukar (32.72) won silver and bronze medals. Singh then teamed up with Oshina Bharati, Dilip Thapa Magar and Anubhav Subba to win the 4X100m free style mixed relay gold with the timing of four minutes and 20.52 seconds.

As Singh has improved her performance, Nepal has high hopes pinned on her for the international swimming tournament. Studying in United Kingdom and living in London with her parents, Singh is a daughter of SLC topper Garima Rana and grand-daughter of senior advocate Lok Bhakta Rana.

Book Remembering Past By A Correspondent 3 days, 12 hours ago

Book Nepal And The Great First World War By A Correspondent 6 days, 14 hours ago