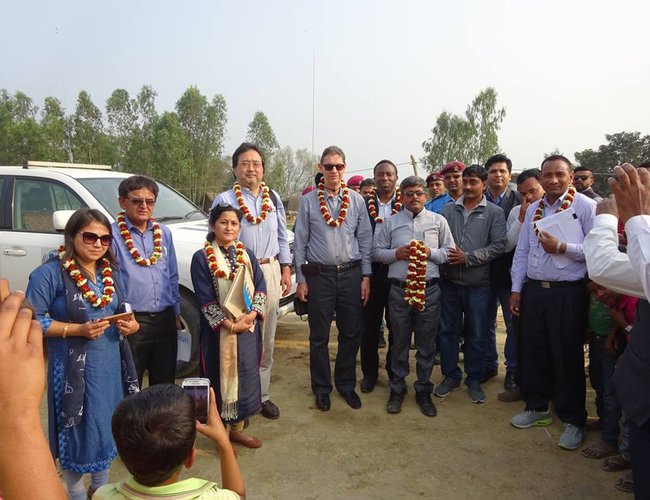 The projects implemented under a support of Government of France have made drastic progress in flood affected. All the programs have achieved remarkable progress.

HI targeted the most vulnerable families in two most affected areas of Dang and Banke districts to cater to the immediate needs of the affected people and the families that were displaced.

According to a press release issued by Embassy of France, Nepal, principal activities included provision of non- food items to 709 households that were essential to their well-being following the floods. The items included tarpaulin, mosquito net, bed, blanket, clothes.  Health and rehabilitation camps were organized and those requiring additional assistance like physiotherapy were referred elsewhere.

“Cash for Work” schemes were implemented to provide short-term employment to 566 households. The activities under cash for work focused on community members working in their areas to conduct activities such as repair of flood damaged structures.  Moreover, unconditional cash transfers were provided to a total of 154 beneficiaries identified by the communities and verified by the local authorities as being the most vulnerable in the project implementation areas.

According to a press release issued by Embassy of France, Kathmandu, a total of 805 people benefited from health and rehabilitation services. Similarly more than 10,000 people have sensitized on sanitation and hygiene in emergency scenarios through a series of mass orientations and awareness raising events. This was done because sanitation is often overlooked during emergencies.

The joint initiative included the provision of ready-to-use therapeutic food (RUTF), Vitamin A and deworming tablets for children as well as nutrition and hygiene education for their parents and caregivers.  Following figures show the achievements from the joint emergency nutrition interventions in four-months (October 2017-January 2018) in the 10 priority districts:

HI is an independent and impartial aid organization working in situations of poverty and exclusion, conflict and disaster. It works alongside the vulnerable populations, whatever the context, taking action and bearing witness in order to respond to their essential needs, improve their living conditions and promote respect for their dignity and fundamental rights. On January 24th 2018, the global Handicap International network, to communicate more effectively on the diversity of the organization’s actions and beneficiaries has adopted a new operating name Humanity & Inclusion.

Japan To Celebrate May 26 As “Hirotaka Takeuchi 14 of 8000m Mountains Summit Day By NEW SPOTLIGHT ONLINE 13 hours, 10 minutes ago

117 People Of Nepali Origin Die Due To Coronavirus In Various Parts Of The World By NEW SPOTLIGHT ONLINE 1 day, 15 hours ago