After a discussion with a team led by Nepal Electricity MD Kul Man Ghising, local people in Ilam have agreed to end the deadlock on Kaebeli corridor 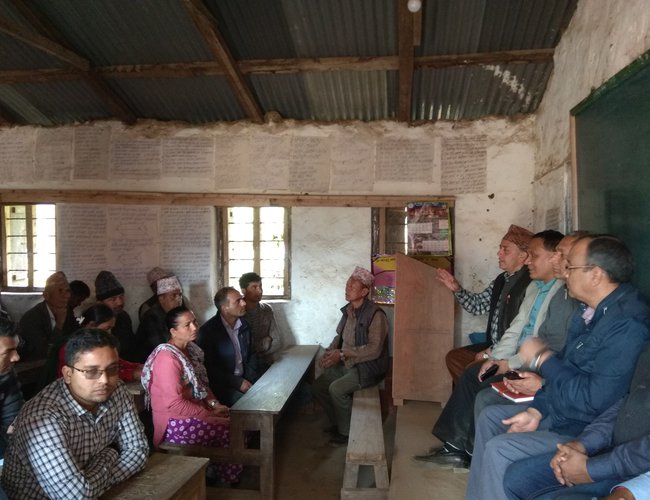 At a time a number of hydro power projects in Ilam, Taplejung and Panchthar are in the final phases of power generation, they are likely to face evacuation in case of failing to complete the 132 KV Kabeli Corridor Transmission line.

Ghising, arriving in Phidim to take stock of the under-construction powerhouses in Mechi, warned the contractor companies that the deadline would not be extended for the third time.

According to a news item published in The Himalayan Times, the 5 megawatt (MW) power generated by Shivani hydropower and 14.9 MW power by Panchthar’s Hewakhola hydropower are yet to be transmitted to the 132 KV national transmission line at Kabeli Corridor due to the delay in work.

Further, Ghising drew the attention of the contractors to the wastage of 86 MW power generated by the hydropower — Hewa B, Kabeli A and Kabeli B — and directed to complete the construction within Baisakh (mid-May).

Of the total 259 towers required for the extension of the 90-km transmission line, 12 towers are yet to be constructed due to disruption following the protest by locals of Siddhithumka.

The 132 KV national transmission line Kabeli corridor Chief Dipendra Raj Dwibedi, however, has claimed that 75 percent work has been completed. He had accused some individuals of provoking the locals to disrupt the work of Kabeli Corridor.

With the financial assistance of Rs 2.85 billion from the World Bank, Indian companies — Jagbar Overseas and Starjevi Pvt Ltd — are constructing the transmission line.

The team will all assess the total damage of houses and infrastructure. Local population has been disrupting the work demanding hundred percent compensation to the land owners of right of way and change of current route. Due to the protest of local population, the project is unable to install 11 towers. Due to problems in the transmission line, a waste of 100 MW of energy generated by private sector is likely.

During the meeting with local stakeholders, MD Ghising agreed to address the genuine problems raised by the people and requested them not to disrupt the construction process.

“If the disruption continues, the energy generated by the projects will be wasted and the country will have to import electricity from India to meet the requirement,” said MD Ghising. He has also made it clear that it is impossible to compensate hundred percent for the land of left and right side of right of way of transmission line.  “We can pay only 10 percent compensation.”

Mayor of Deumai Municipality Surya Prasad Pokharel said that they will support the projects of national importance. “People have to let the projects go so that Nepal can make benefits.”

Similarly, residents of Jorsalla and Thapatar portion of Fidim Municipality havve also agreed to allow the construction of 11 towers. Kabeli Corridor is under construction to evacuate the energy from Kabeli, Hewa and Mai hydropower projects under the construction. The corridor will connect Jhapa, Ilam, Panchthar, Terhathum and Taplejung to national grid.