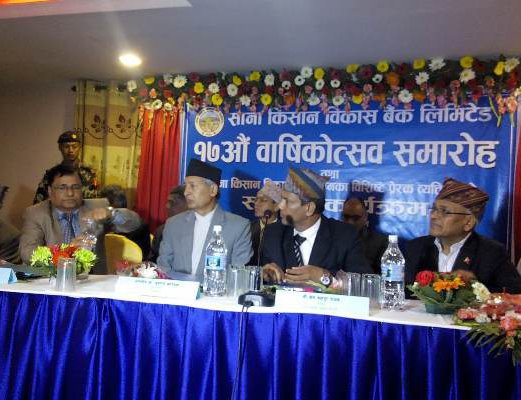 Started 17 years ago with a net capital of 170 million rupees, Sana Kisan Bikas Bank, a venture of Agriculture Development Bank, Small Farmer Cooperatives and other private banks, has proved to be a reliable and integral partner of small and marginal farmers. In the 17 years, the bank’s deposit has reached Rs. 17 billion with Rs.15 billion loan.

The bank has made a tremendous progress through its poor oriented programs. Supported by Government of Israel, a nine-month long ‘learn and earn’ program has also helped uplift the young sons and daughters of small and marginalized farmers.

Under this program, more than 3000 sons and daughters of small farmers have already visited Israel to learn modern agriculture and they have returned with certain earning. Many of those who returned from Israel have already started commercial farming in bigger scale.

In a country with an overwhelming majority of farmers, the service demand of Sana Kisan Bank continues to increase. Establishing its network in 69 districts through over 600 cooperative members, the bank is now serving over 7 million population of the country.

Whether it is in the distribution of loan to enhance productivity to the farmers or loan to reconstruction, Sana Kisan Bank has reached out to the needy people. As its system is transparent and people oriented, the recovery rate of the bank is very high.

As the Bank’s overall lending and base of capital has changed and the demands of farmers are growing, the limitation set for the bank remains very small. To make the bank more friendly and friend of poor and small farmers, there is the need to change its initial status, opening more room for investment.

However, the recent Bank and Financial Acts has put restrictions on it. Given the present act, there is the need to have a certain protection from the ministry of finance and Nepal Rastra Bank.

As Dr. Yubaraj Khatiwada is in the ministerial charge of Ministry of Finance, the bank has a good opportunity to move ahead through the extension and expansion of its jurisdiction.

Working for the poor without aiming at profit, SANA Kisan Bank needs certain protection from the government and support to increase its capital.  Finance Minister Dr. Khatiwada hailed the role played by Sana Kisan Bikas Bank Ltd to uplift the life of poor and marginalized farmers from remote and rural parts of the country.

Addressing the 17th anniversary of the bank, Dr. Khatiwada said that the poverty eradication is possible only through the uplifting of the life of poor people and Sana Kisan Bank can play an important role in this direction. “As a son of small farmer myself, I know the difficulties of small farmers,” said finance minister Dr. Khatiwada.“Given the important role played by Sana Kisan Bikas Bank, the government is ready to provide all kinds of support to the bank”

As the bank celebrated its anniversary, it also recognized the persons involved in the promotion of small farmers. Finance Minster Khatiwada felicitated the bank’s employees and other individuals, who had contributed to strengthen Sana Kisan Bikas Bank. During the program, chairman of National Cooperation Federation Keshab Badal also highlighted the importance of the bank.

Leading the bank for eight years, former CEO Jalan Kumar Sharma pushed it to take a new step, new CEO Dr. Shivram Prasad Koirala, who took charge just five months ago, has already come out with a new vision and planning to transform the bank into another stage.

With hard and dedicated chairman of SAFCL Khem Bahadur Pathak at helm and new dynamic leadership under CEO Shivaram Prasad Koirala, the bank is set to overcome all the challenges of the future.

BHARAT RAJ PAUDYAL: Diplomat With Passion By A Correspondent 4 days, 8 hours ago

MADHAV BELBASE: The Father Of TBM In Nepal By Keshab Poudel 4 days, 22 hours ago

Hindu Kush Himalayan Region’s Ministers Come Together For The Cooperaiton On Climate Action By NEW SPOTLIGHT ONLINE 5 days, 7 hours ago

SHANKER DAS BAIRAGI: Diplomat At Helm Of Civil Service By A Correspondent 5 days, 10 hours ago