Establishment Of Diplomatic Relations Between Nepal And Saint Kitts And Nevis 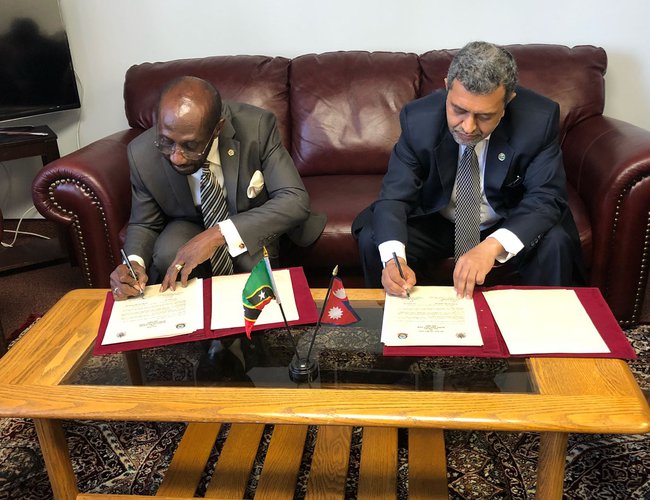 Nepal and Saint Kitts and Nevis established formal diplomatic relations today. Ambassador Durga Prasad Bhattarai, Permanent Representative of Nepal to the United Nations, and Ambassador Sam Terence Condor, Permanent Representative of Saint Kitts and Nevis to the United Nations signed an instrument to this effect at a brief ceremony in New York this afternoon.

On the occasion, the two Ambassadors underscored the importance of continuing cooperation at multilateral levels as well as opening avenues for bilateral cooperation in areas of common interest, such as climate change and natural disasters as well as tourism cooperation. They also resolved to continue working together at the United Nations in pursuit of peace, development and common prosperity ahead.

According to press release issued by Permanent Mission of Nepal to the UN, New York, the two Ambassadors also jointly informed António Guterres, Secretary-General of the United Nations, about the establishment of Nepal-Saint Kitts and Nevis bilateral relations today.

Saint Kitts and Nevis joined the United Nations on 23 September 1983 following its independence from the United Kingdom on 19 September 1983. It is a member of the Commonwealth, with Queen Elizabeth II as head of state. Before independence, Saint Kitts was home to the first British and French colonies in the Caribbean, and thus known as "The Mother Colony of the West Indies"

The number of countries with which Nepal has established diplomatic relations has now reached 159.

14 Districts Are Under Prohibitory Order In Nepal By NEW SPOTLIGHT ONLINE 2 days, 3 hours ago

India Has Doubled Its Security Forces In Kalapani By NEW SPOTLIGHT ONLINE 3 days, 5 hours ago