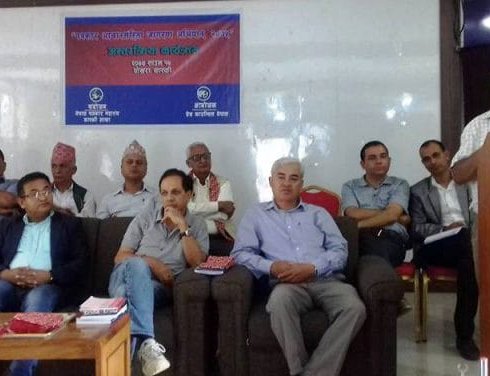 Acting chairperson of Press Council Nepal Kishore Shrestha revlealed that the trend of violating the code of conduct is rampant in the online media saying that the council receives numbers of complains monthly regarding the violation of code of conduct.

As journalist is used a toe and robot, there increase the incidents of distortion of news. He cautioned media saying that distortion of information will likely to derail the social systems and values. Acting chair person Shrestha Suggested to abide to code of conduct to minimize the social damage reports Deshsachar.com.

He said that journalism without fear, base and accountability is dangerous. Addressing a code of conduct awareness program jointly organized by Council and Federation of Nepalese Journalist Kaski branch, acting chairperson Shretha said it is a matter of great concerned that an institution recognized as a fourth state is heading towards wrong direction.

Acting chair Shrestha said that the new act, which will be promulgated from mid August, will likely to make media more responsible and accountable.

Chinese Embassy Issues A Strong Protest Against An Article Published In English Daily By NEW SPOTLIGHT ONLINE 5 hours, 53 minutes ago