With a decision to hold joint military exercises in a month, the Fourth BIMSTEC Summit concluded with a declaration to enhance regional connectivity 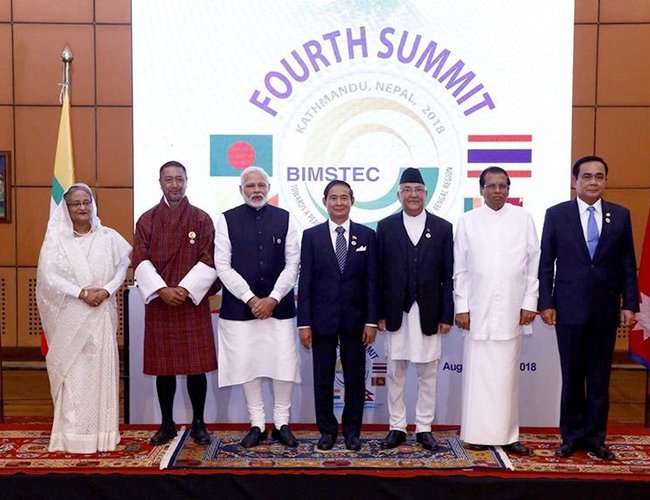 With an announcement to hold a joint military exercise among the members of BIMSTEC this month, the fourth BMISTEC meeting concluded by issuing a declaration to enhance the connectivity with members states, particularly in railways, transport and electricity.

Similarly, the regional group also agreed to work together against terrorism. With the agreement, BIMSTEC members are to launch a joint military exercise in Pune in September in the presence of all the military chiefs of BIMSTEC countries.

The Bay of Bengal Initiative for Multi-Sectoral Technical and Economic Cooperation (BIMSTEC) is a regional grouping comprising India, Bangladesh, Myanmar, Sri Lanka, Thailand, Bhutan and Nepal. The grouping accounts for 22 per cent of the global population, and has a combined gross domestic product of USD 2.8 trillion.

Like South Asian Association of Regional Cooperation, BIMSTEC is also a heterogeneous group of countries. SAARC has not made progress because of the difference between India and Pakistan on their bilateral meetings.

BIMSTEC countries are to have their country specific interpretations on terrorism. The growing row between Bangladesh and Myanmar on the question of Rohingya may create problem for BIMSTEC in the future.

Although Bangladesh Prime Minister and Myanmar President did not speak on the issues of Rohingyas, different perceptions exist on the issues.

This is the reason the Bay of Bengal Initiative for Multi-Sectoral Technical and Economic Cooperation summit in Kathmandu doggedly sought to avoid the controversy.

Bangladesh's prime minister and Myanmar's president sat at the same table but did not discuss the Rohingya crisis that divides them. "BIMSETC is focused on cooperation between the countries and they did not talk about bilateral issues," said foreign minister Gyawali.

One of the main achievements of the summit was to agree on establishing a cross-border energy trade in a bid to foster closer ties between members Bangladesh, Bhutan, India, Myanmar, Nepal, Sri Lanka, and Thailand.

The Foreign Minister termed the agreement to establish a regional electricity grid was a major milestone of BIMSTEC summit.

The regional alliance of Bangladesh, India, Sri Lanka and Thailand was set up in 1997 with the goal of establishing a free trade pact. Bhutan, Myanmar and Nepal joined later.

Nepal’s Ministry of Foreign Affairs has once again proved that it has the capability to host a big summit successfully within a short span of time.

From making a venue, drafting a declaration and circulating it for endorsement, Ministry of Foreign Affairs under the leadership of minister Gyawali and foreign secretary Shanker Das Bairagi and his team have played an important role.

Although he did not come up publicly, career diplomat Bairagi managed the events from behind very well, even handling the visit of Sri Lankan president.

Resignation of Prime Minister Padma Shamsher and the Fate of his Constitution By Dr. Bipin Adhikari 2 weeks, 3 days ago

Resilience And Poverty In Kathmandu: The Story Of An Encounter By Benoît Clémencin 2 weeks, 4 days ago