Tributes To Titan of Nepalese journalism

Tributes to Titan of Nepalese journalism 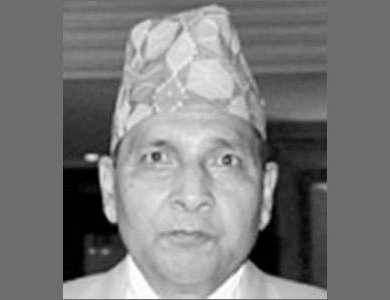 In the sad passing away of Hem Raj Sharma Gyawali, we have lost a true professional, both in terms of civil service and journalism. He retired as Additional Secretary after serving for civil service with dedication and hard work for over three decades.

He was an indomitable fighter and sought to inject a modern line in the field of journalism and established his flagship Kantipur publications. He later established Nagarik and Republica and started to give international tone to his publications.

Apart from these two fields, he was a great scholar of our culture and religion and knew things that people like us can never aspire to learn and practise in life.

Very few, however, know that though late Gyawali rose to great heights in his two chosen fields, his only regret in life was that he was not taken in by the Foreign Service despite being selected for the service in 1961. He was third in merit list as Foreign Service was to recruit three people that year.

However, the Ministry accepted only two toppers, Narendra Bikram Shah (Foreign Secretary, ambassador and Foreign Minister) and Chura Bahadur Hamal (ambassador). He was not taken in the service for his alleged Sanskrit and Nepali backgrounds. It soon became an act of administrative play and another colleague in the roster, sixth in line, Sundar Nath Bhattarai, was selected and retired as our ambassador in Bangkok. He thought himself not at all inferior to others many of whom were just knowing Hinglish and Neplish rather than English as he put it to me once.

Apart from Hem Raj Gyawali, two others who were bypassed were Nidhendra Raj Sharma who became Secretary later and Subarna Laxmi Malla. It is likely that Miss Malla who would have joined her cousin Bhinda Shah, our first lady ambassador, as second lady in Foreign Service, found her own love much more important and sacrosanct than the sterile field of diplomacy.

Late Gyawali was all the more unhappy as many others in the list of 36 successful contestants soon found their way into the Foreign Service later through other means and he found himself subjected to this injustice.

Once again our tributes to the great man and may his soul rest in peace.

Niranjan Koirala Is No More By A Correspondent 6 months, 3 weeks ago

In Memory Of Dr. Sukhdev Shah By Ambika P. Adhikari 9 months, 2 weeks ago

Yagya Prasad Acharya Is No More By NEW SPOTLIGHT ONLINE 10 months, 1 week ago