With a great division among media and politicians, Asia Pacific Summit concluded calling for global peace 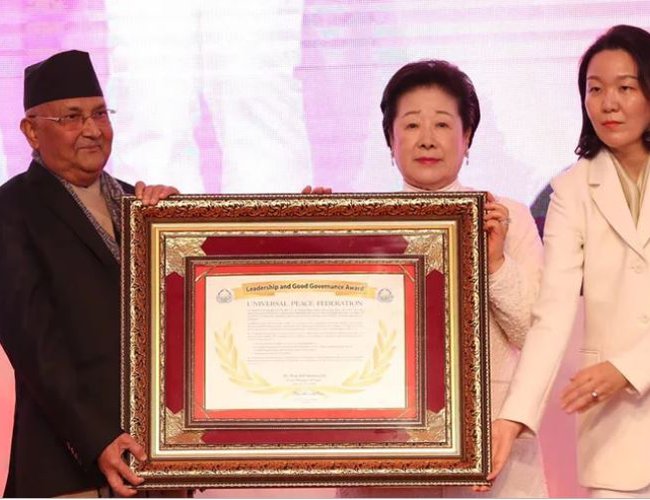 Unlike in the past when almost every politician and people from different walks of life preferred to participate in regional events at home, the Asia Pacific Summit and Prime Minister K.P. Sharma Oli receiving the award, generated more controversy than one would desire to see.

Speaker Krishna Bahadur Mahara chaired a session related to the summit. Conspicuously, NCP Co-chair Dahal was absent from the summit on Saturday, which he was scheduled to chair at the closing ceremony.

Amid widespread criticism, a section of leaders from the ruling NCP refrained from attending the summit. NCP leaders participating in the summit were mostly from the erstwhile CPN-UML while very few from the former CPN (Maoist Centre).

Deputy Prime Minister Ishwar Pokharel, Home Minister Ram Bahadur Thapa and senior government officials attended the summit. The South Korean organization has been embroiled in controversies for promoting Christianity in Nepal. Several Nepali leaders and members of parliament have visited South Korea at its invitation in the past. NC Joint-secretary Prakash Sharan Mahat said that party President Deuba did not attend the summit even though he was invited.

The government briefly arrested 46 leaders of the Rashtriya Prajatantra Party-Prajatantrik, who demonstrated against the summit on Saturday. They included former minister and RPP-P central member Biraj Bista.

The timing and invitees of the summit were also politically strange for a country like Nepal. Inviting anti-BJP leaders from India, hosting a summit by anti-BJP led group and inviting the head of the governments closer to China and anti-Indian state, Oli government had taken a risk.

Along with the involvement of controversial South Korean religious sect and its Nepal branch chair and former Minister Yeknath Dhakal, there are many more reasons that pushed the summit into controversy.