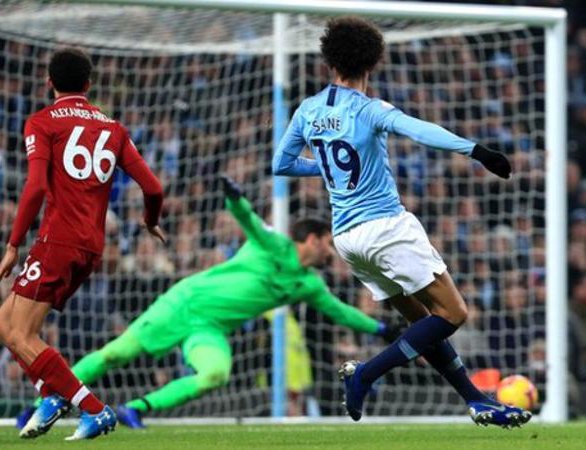 Manchester City demonstrated substance as well as style as they overcame Liverpool, the greatest threat to their hopes of retaining their Premier League title, on a night of searing tension.

Pep Guardiola's City side - who made history to win the league with 100 points last season - knew they would need to dig deep into their reserves to beat a Liverpool team arriving at Etihad Stadium on the back of a 20-game unbeaten start to the campaign.

The purist flourishes that have become the hallmark of City's style were set to one side for much of a frantic, intense encounter in favour doing the dirty work required to get the job done after Guardiola admitted himself that a failure to win would make their title task close to impossible.

And while the headlines may go to goalscorers Sergio Aguero and Leroy Sane, City's whole approach and their victory was built on the performance of their great unsung hero.

For all the glittering array of riches assembled at City, Fernandinho is the glue that holds all the parts together.

The 33-year-old Brazilian is the man Guardiola misses most when he is absent, whose presence casts an understated influence over games in a such an impressive manner that City have still not found anyone who can do a similar job.

Fernandinho delivered a masterclass here. He was such an all-consuming influence that on some occasions he appeared to have a body double operating in all areas of the pitch.

He was combative but composed, a creator as well as destroyer. Fernandinho was a man on a mission to deliver the complete midfield display and succeeded spectacularly.

City and their fans could have been forgiven for fearing history would repeat itself as Liverpool scented blood but a measure of composure was retained as Raheem Sterling set up Sane for the decisive blow.

There is still a frailty about this City side that induces nervousness both in themselves and their fans, especially the pinball that followed Sadio Mane striking a post in the first half.

And it was all hands to the pump as Liverpool pressed in those chaotic closing moments, although City did not help their own cause with some wayward late finishing.

City survived that frenzied phase - as they needed to do because another Liverpool leveller at that stage would have represented a devastating blow.

The celebrations on and off the pitch were measure of the significance of City's win. This could have been the night when, to all intents and purposes, their pursuit of a second successive title could have ended.

Instead, City and Guardiola can move forward with renewed conviction, bolstered by the knowledge Liverpool made a 20-game unbeaten start to the season and are still only four points ahead of them.

Liverpool are in a commanding position but this Premier League title battle has a long way to run.