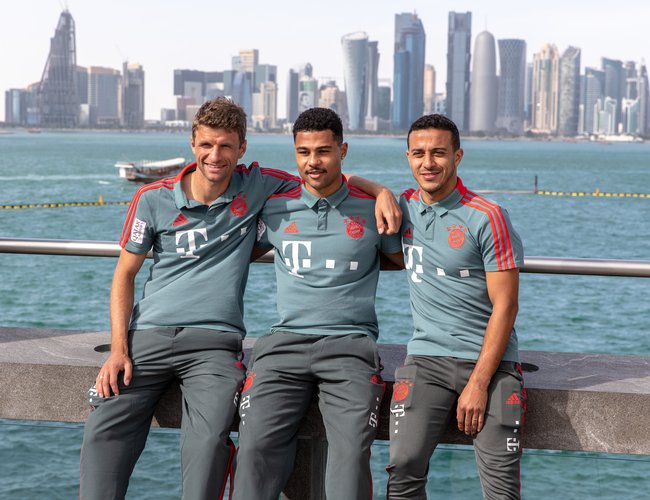 According to a press release issued by Qatar Airways, since 2011, the FC Bayern München team has visited Doha to participate in its January winter training camp, to avail of the world-class facilities available to them at Aspire Zone.

”Sport is a key pillar of the long-term vision of the State of Qatar, and as Qatar’s national carrier, we welcome the opportunity to use sport as a means of bringing people together. We wish Bayern München a very successful Bundesliga season, and look forward to cheering them on.”

Players were flown to Doha by Qatar Airways on board its state-of-the-art Airbus A350-1000, the world’s most technologically-advanced passenger aircraft, where they were able to experience the airline’s revolutionary Qsuite Business Class seat, providing an unparalleled travel experience, legendary hospitality and world-class service.

During their stay, three Bayern Munich players: Thomas Müller, Joshua Kimmich and Serge Gnabry, had the opportunity to visit the Legacy Pavilion, where they were able to view models of the stadia that will serve as venues for the the 2022 FIFA World Cup Qatar™, as well as the iconic Museum of Islamic Art. The players also had the chance to attend the launch of the Qatar Airways Travel Boutique, the first-ever Qatar Airways store at Hamad International Airport (HIA), on 9 January 2019.

Children from the Qatar Cancer Society also attended the winter camp, where they were able to meet and interact with their football idols. The children each received a jersey exclusively signed by the players and had photographs with Berni, the official team mascot.

Qatar Airways proudly supports a range of exciting international and local initiatives dedicated to enriching the global community that it serves. Qatar Airways, the Official Airline partner of FIFA, is a leading supporter of major global sporting events, including the 2022 FIFA World Cup Qatar™, and the FIFA Club World Cup™, reflecting the values of sports as a means of bringing people together, something at the core of the airline’s own brand message – Going Places Together.

Qatar Airways has served the people of Germany for nearly 20 years. The carrier now operates 35 weekly flights between Doha and Germany – double daily non-stop to Munich and Frankfurt – as well as daily non-stop to Berlin, providing onward connections to more than 160 destinations across the Middle East, Africa and Asia Pacific.

VISIT NEPAL 2020 NAC As Partner By A Correspondent 4 weeks, 1 day ago