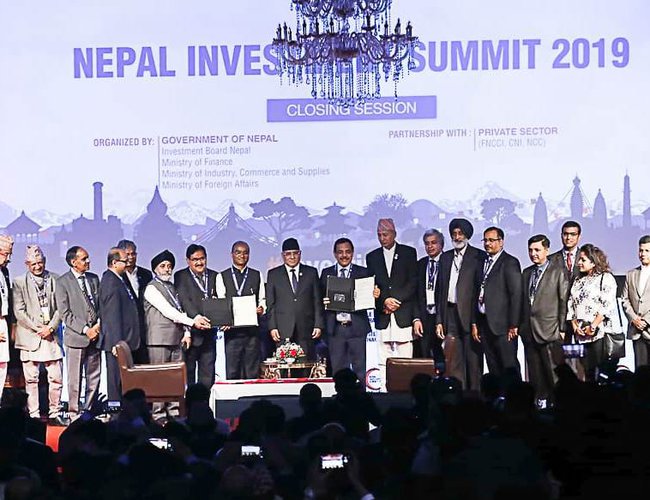 Out of 50 projects proposed by the government, investors have applied for 17 merely 17 projects when Nepal Investment Summit Came to an end today at Kathmandu. Seventeen investors applied with letter of intent. Those include Bhaktapur Convention Center, Maternity Service Center in Lumbini Hospital, Logistic Center in Birgunj, West Seti Hydropower, Tamor Hydropower,

Executive Officer of Nepal Investment Board Mahaprasad Adhikari said that the summit is a big success as numbers of investors to agree to invest in Nepal. Hoping to receive more letter of intent, the government the time till April 20 to bid.

According to National News Agency RSS, investors at home and abroad attending the 3rd Nepal Investment Summit have sought full implementation of Nepal government’s commitment to put procedural reforms and policies for investment security while expressing their excitements over favorable environment created for investment in Nepal.

They expressed happiness at the government’s efforts to attract investment by making necessary laws and said they would be keeping a close watch on what steps the government would take in providing investment security and removing administrative bottlenecks to that effect.

In a bid to attract as much as investment, the government has brought some bills like the Public-Private Partnership and Investment Bill-2075, the Foreign Investment and Technology Transfer Bill-2075 and amended the special economic zone bill. Besides, preparations are underway to make some related laws, the government said.

The investors attending the summit had pledged investment of approximately $100 million, but only around 25 per cent was realized, government data show.

Likewise, the second summit was convened in 2017 following the proclamation of the new constitution through the Constituent Assembly. In the summit, around Rs 14 trillion in investment was committed, but again only 25 per cent of the sum came as investments, the government added.

In return, government officials have assured the investors of investment security, while experts have suggested that the government takes it an opportunity to fully implement investment commitments made by investors in the context when there is political stability following the conclusion of elections at all three levels–federal, provincial and local.