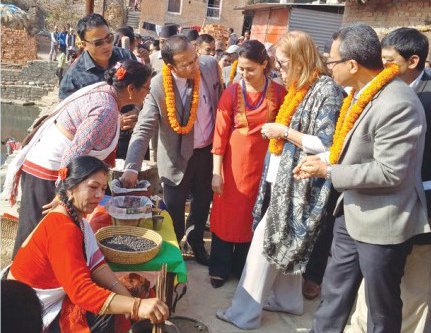 After earthquake, Bungmati has remained quiet most of the time. Although it continues to carry its own tradition, on Saturday, March 30, Bungmati came with a different and distinct identity.

Local people were rushing here and there, displaying their traditional foods, drink, culture, dance and folklore, welcoming the ambassador of European Union to Nepal Veronica Cody, offering her food, wine and taste of culture.

Visiting with locally elected leaders, including the mayor of Lalitpur Metropolitan City, ambassador Cody not only visited the project sites but also felt the warmth of people and tasted the food.

People's overwhelming response to EU ambassador Cody was understandable. With the support of EU, the traditional city, which was on the verge of collapse, has totally revived again.

For people of Bungmati, EU has come with a project for sustainable tourism and green growth. Similarly, Sri Lanka came there with a project three years ago to rebuild the centuries old Bungmati Temple.

As the Temple, which is now slowly taking shape, making the areas as a tourism hub next to Patan is the best option. With its charm as one of the oldest cities in the outskirts of Patan, Bungmati, which has historically separate cultural identity, was facing collapse after earthquake of 2015.

The city landscape, which once was surrounded by green fields, too disappeared with growing urbanizations. At a time when Kathmandu's oldest city is searching its identity, European Union agreed to rescue the city as ready for sustainable tourism.

Encouraged and enthusiastic by EU's helping hand, people of Bungmati are now trying to revive the old town’s cultural glory and its past introducing the city as sustainable tourism destination and for green growth.

EU Ambassador to Nepal Veronica Cody said that the action contributes to enhance the institutional capacity of the local government and communities to put the beautiful Bungmati town firmly on the radar screen of the tourism industry.

Visiting Bungmati, Lalitpur on 28 March to take stock of the progress of Sustainable Tourism and Green Growth for Heritage Settlements of the Kathmandu Valley (Parya-Sampada) project funded under SWITCH-Asia intervention of the European Union, she highlighted that the project more specifically aims in bringing more tourists, supporting the government's effort to celebrate "Visit Nepal 2020", a national tourism year committed to promote tourism industry and enhance local tourism as associated industries.

Ambassador Cody said that the project also aims to promote sustainable development, reducing poverty and contributing towards climate change mitigating, addressing current global challenges and opportunities in the light of the 2030 Agenda for Sustainable Development, more specifically SDGs 5, 8, 11 and 12, supporting the Government of Nepal in the achievement of SDGs in a timely manner.

Bungamati is selected as a prototype out of 52 heritage settlements in the Kathmandu Valley, which has a huge potential to showcase heritage conservation and sustainable tourism through green growth, sustainable reconstruction, entrepreneurship development of women and youth, investment and product innovation.

The project is implemented by UN-Habitat in partnership with Institute for Housing and Urban Development Studies, the Netherlands, Centre for Integrated Urban Development, SAARC Business Association of Home-based workers Nepal, and Lumanti. National Reconstruction Authority is joining hands to provide backstopping support for the reconstruction works at Bungamati.

This comprehensive initiative was kicked off in May 2018 in partnership with the Government of Nepal and Lalitpur Metropolitan City, and is expected to be completed by 2020.

This initiative is an effort to support the post-earthquake recovery process, to regain the lost momentum by restoring Bungmati as a pilot case to its previous stage by conservation and creating sustainable tourism opportunities, mainly to improve livelihood of the community by capitalizing on culture, local cuisines, festivals, rituals, music, local stories, etc. for the Micro, Small and Medium Enterprises (home stays, cafes, and handicraft shops, etc.), especially youths and women.