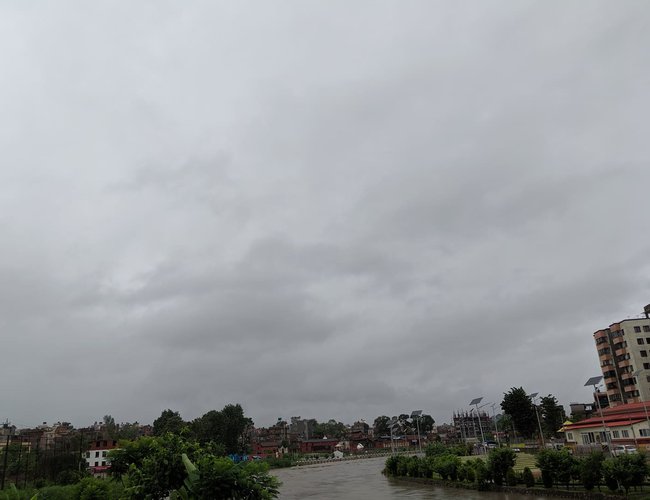 As Axis of Monsoon Trough is still south from Nepal, monsoon has entered into an inactive phase resulting in less rain. According to Meteorological Forecasting Division, there will be partly to generally cloudy throughout Nepal. Rain is likely to occur at a few places of the country.

According to Skymet Weather, low pressure area had developed over North Bay of Bengal on July 26, which moved inland through West Bengal. The system was also responsible for pulling down the Monsoon trough which was running close to foothills of Himalayas. However, the system has now become less marked and has merged with the Monsoon trough.

According to Skymet Weather, series of low pressure areas would keep the Monsoon active in the coming days.

Meanwhile, another cyclonic circulation has developed over North Bay of Bengal. This circulation is also likely to become more marked and induce a low pressure area over the region by July 30-31.

Thus, unlike the earlier system, this likely low pressure area would also bring rains over northern parts of the country like Punjab and Haryana. The trough which is now running south of its usual position,would then oscillate towards north.

This is not all, weather conditions are conducive for another low pressure area is likely to develop in North Bay of Bengal around August 4. This would too follow the same pattern, keeping Monsoon active over the country.

With this, like July, August is also likely to witness a thumping start

A Fresh Western Disturbance Is Over Nepal By NEW SPOTLIGHT ONLINE 2 days, 17 hours ago

Generally Cloudy In Hilly Regions And Fair In Rest Of Nepal By NEW SPOTLIGHT ONLINE 3 days, 15 hours ago

Weather Forecast For March 25: Brief Rains Or Thundershowers In A Few Places By NEW SPOTLIGHT ONLINE 4 days, 16 hours ago

Generally Cloudy In Western Region, Thunder and Lightening Likely To Occur In Few Places Of Nepal By NEW SPOTLIGHT ONLINE 5 days, 16 hours ago