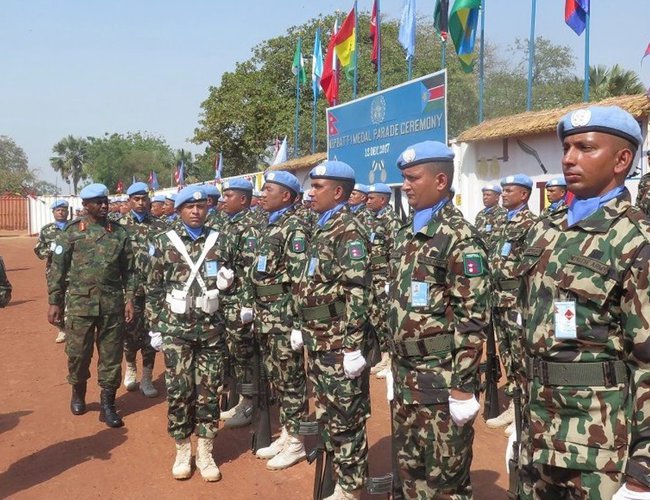 As part of the directives of Chief of Army Staff General Purna Chandra Thapa’s Soldier Directed Project, Nepal Army has increased the basic allowance of Nepali soldiers serving in UN Peacekeeping Missions. For a long time, there had been a growing concern over the pay scale of Nepali Peacekeepers. This increase addresses the issue.

Nepal became a member of the United Nations in 1955 and, since then, has been an active participant of most UN peace operations. The participation of the Nepali Army in UN peace support operations spans a period of over a half century covering some 43 UN missions, in which over 1,27,395 personnel have participated.

The army’s long association with UN peace support operations began with a modest deployment of five military observers in Lebanon (United Nations Observer Group in Lebanon) in 1958. The first Nepali contingent, Purano Gorakh Battalion was deployed in Egypt in 1974.

A board meeting of Nepal Army Welfare Trust Management Committee meet took the decision to increase the basic allowance of Nepal Army’s soldier serving in mission by US $ 85 per month. Now one Nepali solder will receive US$ 1029.

This decision was taken as part of the directives of Chief of Army Staff General Purna Chandra Thapa’s Soldier Directed Project. This increase will be paid from Nepal Army Welfare Trust. After this increase, the trust will bear additional 460 million rupees. According to Nepal Army, this will be applied from October 1.

Similarly, the monthly salary of commander of mission will also increase by 21 US$. Now the commander of battalion will receive US$ 1399. Currently, 5094 Nepalese soldiers are working in various UN Peacekeeping Missions. UN provides US$1200.97 as a basic salary for all peacekeepers.

Along with this, the COAS General also announced to public the property details showing an example for others to follow it. This is also a major part of reform within Nepali Army. In his recent statement, COAS General Thapa also agreed to fully cooperate with the commission to solve the issues related to conflict.

COAS General Thapa's recent decision will boost the image of Nepal Army, making it a transparent institution of the country.

Melamchi Water To Reach Kathmandu On Saturday, Urged Locals To Cautions By Agencies 22 hours, 12 minutes ago

PPE And Reproductive Health Kits Handed Over To Nepal By NEW SPOTLIGHT ONLINE 1 day, 18 hours ago