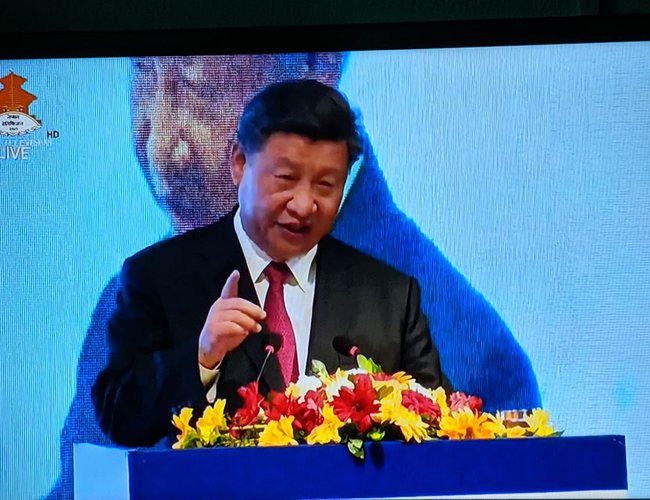 Visiting Chinese President Xi Jinping said on Saturday that the feasibility study of cross-border railway between the two countries would be conducted.

On the occasion, Xi stated that the cordial relations between Nepal and China were centuries-old. President of the People’s Republic of China Xi Jinping, who arrived in Kathmandu on Saturday evening on a two-day State visit, said Nepal and China had nothing but friendship.

“We have model friendship in the world, and there is no issue between the two countries but friendship,” he said while speaking at the State Banquet organised by President Bidya Devi Bhandari in his honour at Soaltee Hotel.

President Xi said that he and his Nepali counterpart Bhandari had agreed to develop relations, friendship and partnership that would help in development and prosperity for many generations to come.

He assured that more reliable and easier connectivity facility between the two countries would be constructed in the near future.

Maintaining that China would expedite the development of Trans-Himalayan Multi-Dimensional Connectivity infrastructure, he said, “We want to support Nepal in realising its dream to become a land-linked country from the landlocked country.”

He is happy that the leadership of both the countries together made it possible to develop and implement a new framework of friendship and plans.

“I am hopeful that there will be more cooperation between Nepal and China at multilateral platforms,” he said.

According to Xi, Buddhism has become a local religion in China, and many Chinese want to visit Nepal and Lumbini, and in future there will be more religious exchanges.

He also said that China was ever ready to conserve Sagarmatha region and support Nepal’s genuine demands regarding the issue of climate change.

President Xi announced a support of 3.5 billion RMB to be provided between 2020 to 2022 for uplifting the living standard of the Nepali people.

President Bhandari, in her welcome remarks, appreciated China for its support in Nepal’s development efforts and cooperation at the international platforms.

“Nepal and China have been standing together and extending cooperation in multilateral platform for peace, stability and development,” she said.

Geographically Nepal and China are close friends while history and culture have helped in developing cordial relations, she said. “At this juncture, Nepal wants to express its commitment to taking the bilateral relations to a newer height.”

She reiterated Nepal’s commitment to ‘One China Policy’ and not allowing any force to use Nepali land against China.

President Bhandari said that the land of Lord Buddha expected Chinese support in developing Lumbini as a centre of world peace, and infrastructure improvement for cross-border connectivity.

According to her, since Nepal’s internal resources are not sufficient to meet the ambition to become a middle-income country by 2030, it needs more foreign investment. The country wants Chinese investment in the productive sectors like infrastructure, energy and tourism, she said.

“The government will assure security to the investment made in Nepal,” President Bhandari said.

She also said that Nepal expected support of the Chinese government in Visit Nepal Year 2020, conserving mountain ecology and combating the impact of climate change.

She informed President Xi that the government was holding an international forum ‘Sagarmatha Sambad’ and said Nepal expected high-level participation from China.

Nepal is organising ‘Sagarmatha Sambad’ – an international dialogue, in March 2020, and the main agenda of the first summit would be climate change.

As the global warming has created alarming situation in the mountains and plains equally, and the country wants to draw the attention to the climate change impacts on Himalayas, environment and people, the first Sambad will be focused on the same theme.

The Chinese president has arrived here wrapping up his two-day informal talks with Indian Prime Minister Narendra Modi held in Chennai, the southern city of India.

Advertisement Code Of Conduct Announced By Agencies 2 days, 6 hours ago