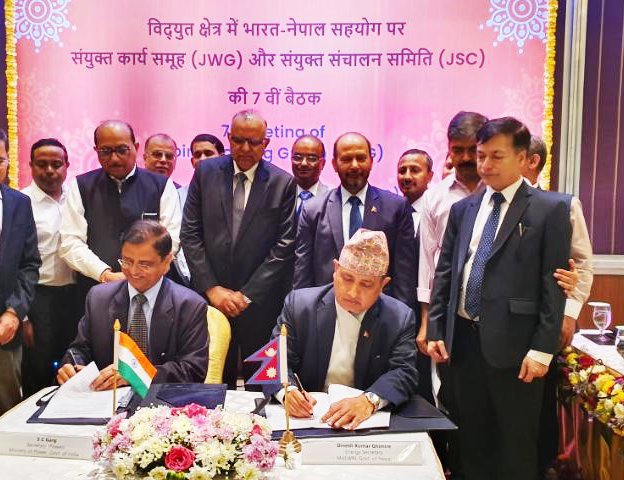 Having worked for a long period of time and led several delegations from Ministry of Energy, Secretary of Energy, Water Resources and Irrigation Dinesh Kumar Ghimire used all his skills this time to make a major breakthrough in cross border transmission line.

Ghimire has shown that experiences count in dealing and breaking the barrier in negotiations. With the backing from his minister, Ghimire has opened a new avenue for future electricity exchanges between the two countries.

The meeting of Nepal-India Energy Joint Steering Committee (JSC) has made a major breakthrough agreeing to a modality for Butwal-Gorakhpur 400 kV Cross border Transmission Line. According to the agreement, Nepal and India will have equal 50/50 percent share in the transmission line.

This agreement paves the way to construct the much talked about Butwal Gorakhpur Cross border Transmission line.

For the last few years, Nepal has been pressing India to start work on Butwal-Gorakhpur Transmission line. However, both the sides failed to reach an amicable agreement on the issue.

“This is a historic agreement and major breakthrough in the negotiation between Nepal and India,” said Dinesh Ghimire, Secretary of Energy, Water Resources and Irrigation and head of the Nepalese delegation. “Since Nepal and India both have already developed a modality in cross border transmission line in Dhalkebar Mujafarpur, we have decided to follow the model,” secretary Ghimire told New Spotlight.

Aryal, joint secretary at MoEWRI, who was a participant in the discussions, said that the secretary-level talks agreed on the agenda prepared by their meeting earlier.

The New Butwal-Gorakhpur cross-border transmission line project is a must to implement the US government’s Millennium Challenge Corporation assistance to Nepal, according to Aryal.

“Government authorities from both sides have spent a lot of time preparing the groundwork for the agreement and we hope it will be finalized this time.”

Aryal informed that there has been agreement to construct the transmission line on government-to-government modality and the detailed project report has also been finalized.

The cross-border transmission line project has been under discussion for a long time and the issue was also raised during the last JSC meeting in Pokhara on January 23. Back then, Nepal and India had agreed to sell more electricity to Nepal. Similarly, at the Pokhara meeting, both the governments had agreed to build the respective length of the transmission line that falls in their territory.

After seven years of operation, Nepal has proposed that both countries must pay according to the quantum of energy used through this transmission line. However, India had refused to accept that proposal.

During the last meeting in January, Nepal and India had discussed opening a joint company to implement the project and there were also talks on India providing interest-free loan to fund the construction work. The meeting, however, did not make any agreement.