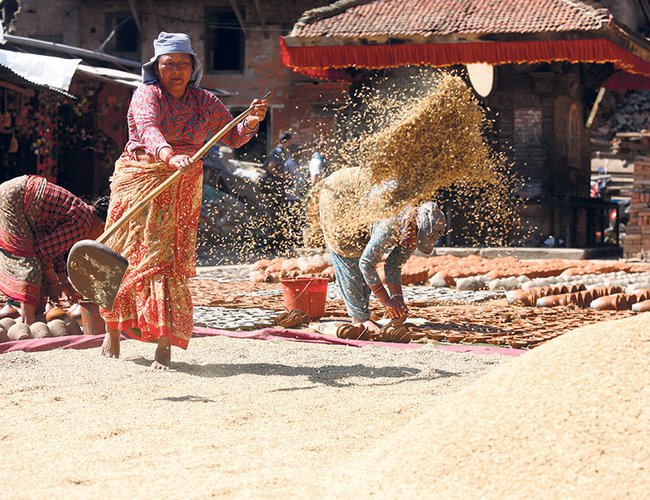 The Ministry of Agriculture and Livestock Development said that this year paddy production went down by 1.05 percent compared to last year. According to a press release issued by the ministry, due to lack of timely rainfall, plotting of arable land, inundation in the Tarai/Madhes, lack of sufficient irrigation facilities and youth population deserting from agricultural activities as causes for the drop in rice production.

According to the 2011 (latest) national census which is conducted in every 10 years, around 6,000,000 metric tons of rice is required to meet the national demand. The Agricultural Census 2068 BS states that agricultural sector has its 32 percent contribution to the GDP. Despite being an 'agricultural country', Nepal is heavily dependent on import for rice as other agricultural products and so many other commodities. Last year, it imported rice worth Rs 28 billion.

Experts predict that it would have its implications on the Gross Domestic Product.Last year, contribution of agricultural sector to the GDP was measured at 27.59 percent. The Economic Survey of 2075-76 BS had projected the contribution of agricultural sector (agro products, forest and fishery) to the GDP to be around 26.98 percent. Rice is the staple crop of Nepal and its stake in the GDP is 12 percent reports RSS.

In his news Rajaram Karki writes cultivation of main season rice (which takes place during rainy season), spring rice (takes place during the Nepali month of Chait or pre-monsoon period) and Ghaiya (a kind of upland rice) is conducted in Nepal.

In the last 15 years, it was 2060/61 fiscal year that witnessed maximum rice plantation. The rice was planted in 1.5 million hectares of land that year, while the production was 4.4 million tons of rice.

After 11 years in 2072/73, the country planted rice in 1.3 million hectares of land, producing 4.2 million tons of rice. Every year, the land to produce rice is reducing. The statistics maintained at Ministry of Agriculture and Livestock Development however show that the land for rice cultivation was shrinking but the production growing. Currently, 1.3 million hectares of land is left uncultivated.

NEPAL-INDIA RAILWAY Greater Access To Services By A Correspondent 3 days, 13 hours ago

SKBLBL Two Decades Of Service By A Correspondent 4 days, 13 hours ago