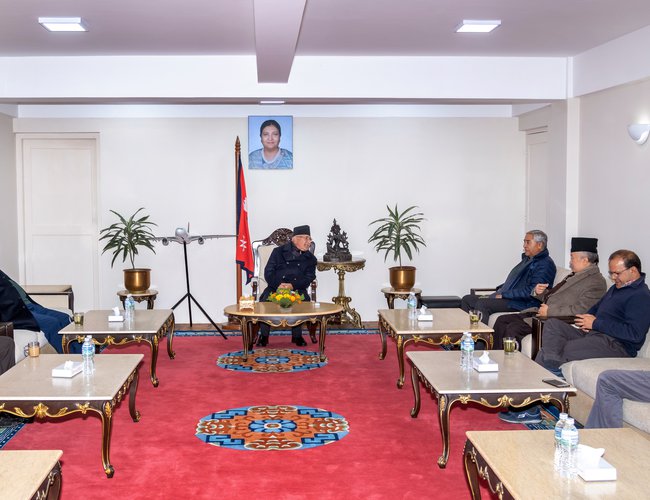 Senior leaders of the top political parties have agreed to prepare bill on transitional justice mechanism. Under the agreement, Nepali Congress nominee will lead Transparency and Reconciliation Commission with one member and three members from ruling Nepal Communist Party NCP. Similarly, NCP nominee will lead Disappearance Commission with one member and Nepali Congress will have three members.

Nepali Congress leader Ramesh Lekhak said the Cabinet will appoint the officials named by the recommendation committee in the two commissions as per the meeting. "The government appoints the chairman and commissioners at CIEDP and TRC immediately after the recommendation committee provides name," he added, and said the leaderships were also concerned over the remaining tasks of the peace process for lack of amended law and commission officials.

Similarly, Yubraj Subedi of NCP as chairman of Disappearance Commission and Bishnu Bhandary ,Sunil Ranjan Singh, Dr. Gangadhar Adhikari and Sarita Thapa are recommended for the remember. Subedi and Bhandary are ruling party nominees and Singh, Adhikary and Thapa are NC nominees.

Chaired by Prime Minister and ruling NCP Chairman KP Sharma Oli, the meeting was attended by NCP Chairman Pushpa Kamal Dahal 'Prachanda' and Nepali Congress President Sher Bahadur Deuba who have agreed for the amendment of the bill on the Commission for Investigation of Enforced Disappeared Persons (CIEDP) and Truth and Reconciliation Commission (TRC).

According to RSS, at the meeting held at PM Oli's residence, Baluwatar, they build the consensus that the bill on CIEDP and TRC would be tabled in the parliament in this winter session and consensus forged accordingly, said NCP parliamentary party deputy leader Subash Nembang, who also attended the meeting. "Top leaders decided to pass the bill on CIEDP and TRC in this very session," he added.

It has been also almost ten months the CIEDP and TRC jobless after the expiry of the terms of its officials. A recommendation committee was formed to furnish names to be appointed at TRC and CIEDP, but it has not been able to recommend names so far.