BANDANA RANA Leading A Cause 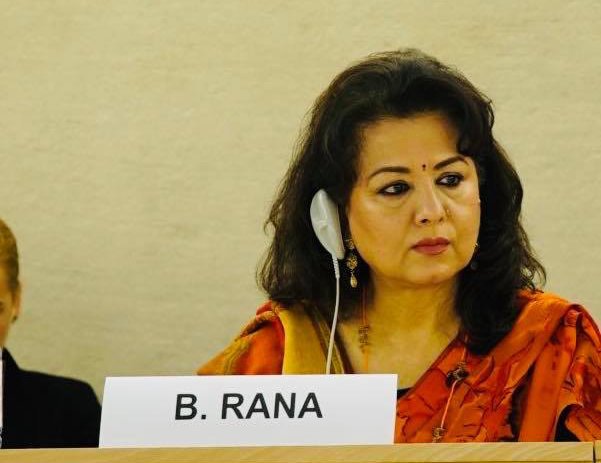 Alongside the new records set by Nepali women becoming the Head of State, Chief Justice and Speaker of Legislature Parliament in the domestic front, Bandana Rana has also set a new record in the international front as a Nepali woman executive in the Committee on the Elimination of Discrimination against Women (CEDAW).

Although she had started her career from the media, the leading Nepali woman activist, Rana, has been able to create a space for Nepali women in the global women’s movement.

Despite hectic time for her travelling from one corner to another defending and promoting the cause of women, Rana has shown the capability of Nepali women at the global level. As Nepal celebrated International Women’s Day with fanfare, Rana’s global presence is highly significant for Nepali women’s movement.

Bandana Rana, Vice Chair of CEDAW and Focal Point - Women in Conflict Prevention, Conflict and Post Conflict Situations, has been a well known personality in international arena. She has established herself as woman leader of the global stature and her voice is heard in major issues.

Addressing various international women platforms, Rana has her role growing. Back home, she works quietly defending the rights of women ending discrimination against them.

Recently Rana was invited to the panel of the 43rd session of the Human Rights Council, a high-level panel commemorating the twenty-fifth anniversary of The Beijing Declaration and Platform for Action.

Rana said that the work of the CEDAW Committee has been crucial in strengthening the accountability of State parties in accelerating the implementation of the Beijing commitments. Rana said that with its legislative and binding framework, the Convention is the strongest mechanism to promote and protect women’s human rights.

Rana, who is Chair of Global Network of Women Peace Builders (GNWP) and Co-Founder and Strategic Advisor of Saathi, Nepal, said that she has worked directly with survivors of violence, founded women’s shelters, worked at the grassroots to the national and global level through various NGOs and Networks she has co-founded, as well as partnered with government entities for promoting gender equality.

Chaired by Ms. Elisabeth Tichy-Fisslberger, president of the Human Rights Council at Palais des Nations, Geneva, Rana said that the different needs of women, in the public as well as the private sphere, must be addressed. She said that the Asia Pacific region in its review of the Beijing+25 has identified 6 priority areas to advance women and girls rights in 2020 and beyond.

Delivering the opening remarks, Ms. Michele Bachelet, United Nations High Commissioner for Human Rights, said that the high-level panel discussion will mark the twenty-fifth anniversary of the Fourth World Conference on Women and

the adoption of the Beijing Declaration and Platform for Action.

The panelists included Jeppe KOFOD, Minister for Foreign Affairs of Denmark, Chen Xu, Ambassador and Permanent Representative of China to the United Nations Office at Geneva and other international organizations in Switzerland, Phumzile Mlambo-Ngcuka, Executive Director of UN-Women, Ms. Bandana RANA, Vice-Chair of the Committee on the Elimination of Discrimination against Women (CEDAW) and Ms.Magalys Arocha-Dominguez, Expert on Human Rights and Gender Equality.

The panel discussion was organized with an objective to provide a space to celebrate the vision of women’s rights as human rights articulated in the Beijing Declaration and Platform for Action, recall the progress made in the past 25 years towards its implementation, discuss the continued relevance of this visionary document to address remaining and new challenges and accelerate progress towards the full and equal enjoyment of all human rights and fundamental freedoms by all women and girls

In two hours of discussion, delegations from different parts of the world interacted with the panelists on various issues regarding the Beijing Declaration and Platform for Action and women’s rights.

Adopted unanimously by representatives from 189 countries at the United Nations Fourth World Conference on Women in September 1995 in Beijing, the Beijing Declaration and Platform for Action laid out a vision for ensuring women’s human rights and achieving gender equality around the world.

As national level Nepali women have achieved a high level of success, Rana has shown the way for Nepali women to lead their cause at the global level.

Melamchi Water To Reach Kathmandu On Saturday, Urged Locals To Cautions By Agencies 1 day, 21 hours ago

PPE And Reproductive Health Kits Handed Over To Nepal By NEW SPOTLIGHT ONLINE 2 days, 18 hours ago