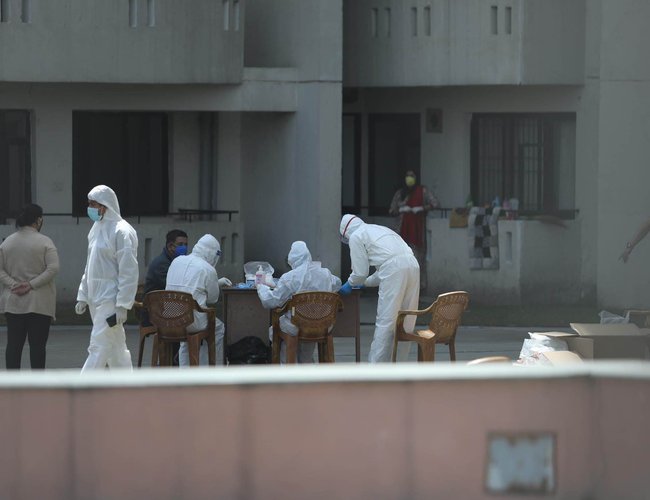 According to the team, the residents of Block A will be tested today in the first phase were tested positive for COVID-19 live. Situated in Kageshwari Manohara Municipality, there are five blocks in Sun City Apartments, which house 475 families. As many as 1,800 people live in these blocks.

Testing through the RDT method began at the Apartments on Wednesday morning considering the risk of virus spread. there are five blocks in Sun City Apartments, which house 475 families. As many as 1,800 people live in these blocks.

Three members of a family, including the woman, her son and his wife were admitted to the isolation ward of Patan Hospital on Monday after they tested positive for the disease during rapid diagnostic tests performed on them.

The PCR tests generated positive results for the 81-year-old woman and her son, while the result of the daughter-in-law is awaited, according to the Ministry of Health and Population. The three had returned from the United Kingdom via Qatar on March 18.

PM Oli Stresses The Need To End Gender Based Violence By Agencies 8 hours, 3 minutes ago

PM Oli Adopted A Rhino By Agencies 4 days, 13 hours ago