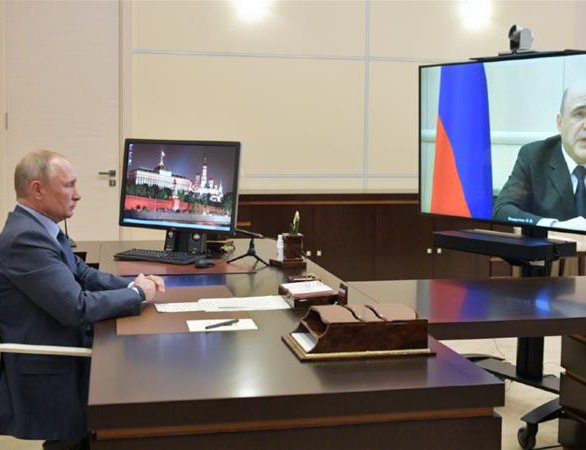 Mikhail Mishustin will temporarily stand down as prime minister, to be replaced by economist Andrei Belousov reports Aljazeera.

Mikhail Mishustin is temporarily stepping down as prime minister of the Russian Federation while he recovers from coronavirus, he told President Vladimir Putin on Thursday.

Putin, who was listening on a televised video conference, sighed when he heard the news, wished Mishustin a speedy recovery and said he agreed with the proposed replacement.

Mishustin, who has been one of the main coordinators of Russia's response to the new coronavirus, is the first high-ranking Russian official to publicly say he or she has the virus. He broke the news hours after the number of confirmed cases of the virus in Russia surged past the 100,000 mark.

"I have found out that the coronavirus tests I had done returned with a positive result," said Mishustin, who was appointed by Putin in January. "I need to self-isolate, and follow doctors' instructions. This is necessary for the safety of my colleagues."

Mishustin was a relative political unknown - the chief of the country's tax service for 10 years - before his appointment to become Putin's right-hand man. His predecessor as prime minister, Dmitri Medvedev - a long-standing Putin ally - stood down when the president announced a wide-ranging series of proposed constitutional reforms shaking up Russia's power structures.

Mishustin said he would remain in contact with members of the government and Putin by phone and video conference despite his condition.

"What is happening to you can happen to anyone," Putin replied matter-of-factly. "When you get to the hospital, call me. I'll be waiting for your call."

The broadcast of the meeting, which showed the men on split screens, lasted just under four minutes.

Mishustin will spend his self-isolation period at a hospital under the supervision of doctors, his spokesman Boris Belyakov said, without disclosing the exact location where the prime minister would be treated.

Belyakov added that all those who had been in contact with Mishustin would go into self-isolation and be tested for the virus.

Russia this week overtook China and Iran in the number of confirmed cases arising from the global pandemic, but has so far reported 1,073 coronavirus-related deaths - a figure far lower than many of the hardest-hit countries.

UK Variant 'May Be More Deadly' By Agencies 1 month ago

A Deadly 'Terror' Attack In Vienna By Agencies 3 months, 3 weeks ago