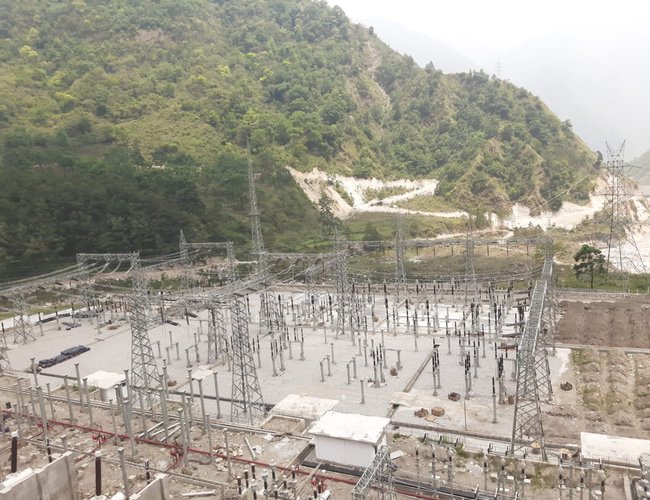 Although the lockdown has completely stopped the mobility, the project with coordination from the local level and district administration is currently undergoing. The project has taken all security measures and followed the guidelines of the Ministry of Health and Population. Similarly, the work of the construction of 220/132 kV substation at Dana and Kusma is undergoing and installation of equipment is almost the final stage of completion.

Managing director of NEA Kul Man Ghising said that the work is going on to charge the Dana-Kusma portion within mid-July. The transmission line helps to evacuate the electricity generated by 42 MW Mistri Kohola and 11.2 MW project of Mustang. Developed by the private sector, both the projects will connect their electricity to the Dana substation to link to the national grid.

Currently, the power generated by Thapakhola Hydropower is evacuated by a 33 kV transmission line. MD Ghising said that the work of the transmission line continues even in lockdown not to waste electricity generated by Mistrikhola. “Despite obstruction in early stage in few places, the construction is now going on without any hindrance due to support from the local level and Chief District Officers. Our team is there to charge the project by the middle of July at any cost,” said MD Ghising. With 39 kilometers long, the Dana-Kushma transmission line has 110 towers. Due to opposition from local level Annapurna Rural Municipality, the erection of one tower is currently underway.

Earlier, local people stopped the construction of the tower demanding to change the route. Thanks to chief district officer of Myagdi District Gyannath Dhakal and chairperson of the municipality and other representatives, the work is no underway.

“At present lying of wire, erection of tower and work in the substation is going on. It will change till mid-July,” said deputy executive director and head of Project Management Manoj Silwal.

Project chief Chandan Kumar Ghosh said that almost other work complete and only 3 kilometers of lying the wire is remaining. Despite the shortage of labor, we will charge the project by mid-July he said.

Funded by the Nepal Government, NEA and a concessional loan of the Asian Development Bank, the transmission line will support to evacuate the energy generated by the private sector project. Similarly, the work under the second phase Kushma, Bhumahi (New Butwal) substation transmission work is undergoing on.

NEPAL-INDIA RAILWAY Greater Access To Services By A Correspondent 2 days, 2 hours ago

SKBLBL Two Decades Of Service By A Correspondent 3 days, 2 hours ago