FAO Warns Multiple Impact Of Viruses, Plagues And Economic Damage Will Fuel Hunger In Asia And the Pacific

FAO Warns Multiple Impact Of Viruses, Plagues And Economic Damage Will Fuel Hunger In Asia And the Pacific 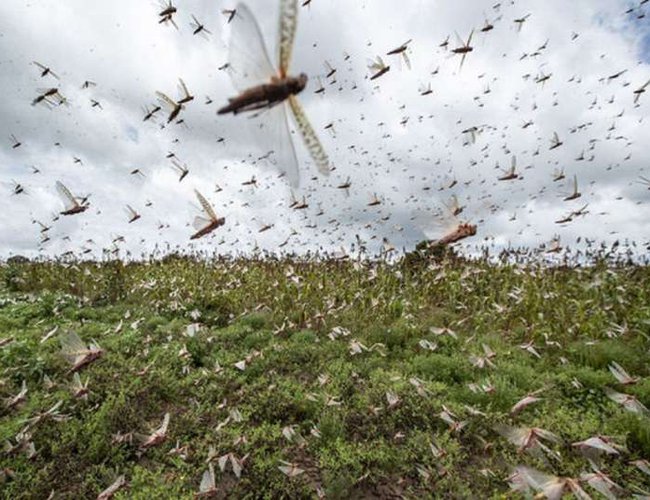 While the world fights to slow the spread of COVID-19, the worst pandemic experienced in a century, countries in South Asia are simultaneously responding to plagues of locusts, cyclones and deadly livestock disease, all of which threaten to worsen hunger and the livelihoods of millions of people, the Food and Agriculture Organization of the United Nations (FAO) warned today. FAO

Swarms of Desert Locust, which originated in Africa, have moved swiftly into west Asia attacking vegetation in parts of Iran and Pakistan, and are now threatening crops in India. These swarms are the worst experienced in more than a generation.

The fall armyworm, a maize-destroying pest that migrated to Asia from Africa in 2018, has also spread across the continent and has arrived in Australia.

Meanwhile, African swine fever (ASF) has re-emerged in the Asia-Pacific region, and for the first time been detected in India. ASF, which ravaged pig production in China in 2018 and 2019, has also been discovered for the first time in the Pacific subregion, with cases confirmed in Papua New Guinea.

Cyclones such as Amphan and Vongfong have added to the damage in some of the countries already overstretched by their responses to the COVID-19 pandemic.

While the lockdowns of countries across the region in response to COVID-19 have taken their toll on the economies, lives, and livelihoods of millions of people, the convergence of these plant pests, severe storms, and animal diseases will only add to the suffering.

“We cannot and must not under-estimate the damage to lives and livelihoods that the convergence of these crises will have on food security and hunger in this part of the world, already home to most of its undernourished people,” said Jong-Jin Kim, FAO Deputy Regional Representative and Head of the FAO Regional Office for Asia and the Pacific. “While we continue the battle to save lives and contain the spread of COVID-19, we must now fight a war that has multiple fronts and various enemies here in the Asia-Pacific region,” Kim added.

African swine fever (ASF) has become an enormous concern in Asia with some 5,000 outbreaks across the region and more recently into the Pacific subregion. The Asia-Pacific region accounts for more than 50 percent of the world’s pig production (2018 figures according to FAO STAT) and pork is one of the major sources of animal protein.

The disease, deadly to pigs but not harmful to humans, resulted in the deaths and culling of millions of pigs in China, the country that was originally hardest hit in 2018 and 2019. This year, for the first time, ASF was discovered in India. Again, authorities are trying to respond to the outbreak while simultaneously responding to COVID-19 and the threat of locusts.

Desert Locusts can devour huge amounts of vegetation, including wild plants, trees and grasslands, but they also attack vegetable crops and fruit trees.

A single swarm of Desert Locust can cover an entire square kilometer and contain some 80 million insects. FAO experts estimate the number of locusts could grow twenty-fold in the upcoming rainy season in South Asia unless extra measures to counter the swarms are put in place. FAO is tracking the movements across Africa, Asia and the Middle East.

Fall armyworm marches on across Asia

In many countries affected by Fall armyworm (FAW), COVID-19 lockdowns have resulted in pest management activities being reduced or ceased entirely. FAO has published a guidance note for responding to outbreaks of FAW during the simultaneous challenges faced by countries’ responses to COVID-19

Farmers need significant support to manage FAW sustainably in their cropping systems through Integrated Pest Management (IPM) activities. FAO has launched a Global Action for FAW Control as a response to the international threat that FAW is posing for food security and the livelihoods of millions of smallholder farmers.

FAO continues to support member nations in Asia and the Pacific

“FAO continues to support our member countries in response to these and other threats in these very challenging times,” said Kim. “Together we’ll get through this, for our own sake, and for the sake of future generations.”

NEPAL-INDIA RAILWAY Greater Access To Services By A Correspondent 1 day, 6 hours ago

SKBLBL Two Decades Of Service By A Correspondent 2 days, 6 hours ago