Regarding the proper utilization through the operation planning process for the management of community forests, Chhap Al Danda forest, near Chautara, Sindhupalchok was chosen to piloting the concept. 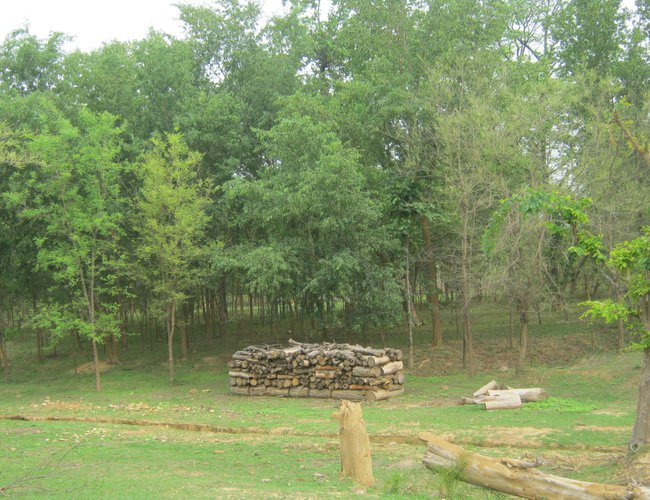 Nepal, with a total land area, is 147,181 sq. km is rich in its biodiversity, cultural and social assets. It experienced five types of climatic zones- hot monsoon, warm temperate monsoon, cool temperate monsoon, alpine and tundra. as well as five major physiographic regions covering High Himalayas, High Mountains, Mid-Mountains, Siwaliks and Terai. According to the National Population Census in 2011, the country’s population was 26,494,504 and currently reached about 29 million. Nepal has 44.74 percent of forests based on Forest Resource Assessment between 2010-2014 and 23.39 percent area under Protected Areas.

Community Forestry is a management modality where forestry for the community, by the community and to the community based on the operational plan approved by Divisional Forest Officer. Firstly, the organizing people's participation goal was initiated with plantation and protection of existing forests within the political boundaries. Secondly, when the protection or plantation took the right track, community forestry helps to protect forests from degradation and deforestation. Thirdly, it initiated supplying forest products especially firewood, fodder, leaf litters, medicinal plants and small timbers for the daily needs of the users. Fourthly, Community in Community forestry has been redefined and involved beneficiaries rather than political boundaries and people. The fifth achievement is that community forestry has been brought under management plans and community members initiated a collection of timbers based on forest inventory using an annual allowable cut approach. At present, community forestry is applying, with the help of the government's directives, silviculture based forest management in the country.

In the early journey, Thokarpa, Banskharka, Pipal Danda became popular Community Forestry sites of Nepal located in Sindhupalchock district. The government of Nepal declared the names of founder concept campaigners included then Divisional Forest Officer Dr. Tej B.S Mahat and local Nil P Bhandari. In addition, the government declared first site-Thokarpa-from where the concept of community forestry especially the protection of forest through peoples' participation in a given political boundary.

Regarding the proper utilization through the operation planning process for the management of community forests, Chhap Al Danda forest, near Chautara, Sindhupalchok was chosen to piloting the concept. However, the process could not succeed due to lacking beneficiaries' boundary and participation of representatives from the political units. The second attempt was carried out in the Sano Ban Forest is in the TukuchaPanchayat of Kavre district, just outside the Kathmandu Valley. A major field exercise was carried out using focus group techniques and find out the beneficiaries who can sustainably manage the forests. A simple management plan was prepared for the Sano Ban and handed over to Forest User Groups through the Panchayat, which has become the first CFUG-based Community Forest in Nepal.

During the journey, a number of non-government institutions have emerged in favor of Community Forestry. In 1992, a district-level user group meeting was held in Dapcha by District Forest Officer, the author, Kavrepalanchok aiming to maintain a social system with the technical part and coordination between stakeholders. However, the district level community forestry coordination ad-hoc committee could not register and continued. In the meantime, Federation of Community Forest Users Of Nepal emerged and established in 1995 from the idea that forest users from all parts of the country should be linked in order to strengthen the role of users in policy-making processes. The Community-based Forestry Supporters’ Network, Nepal was also established in 2004 which is committed to a Rights-Based Approach to enhance community-based forestry programs by exchanging experiences of facilitators and by developing their capacity for integrated resource management through CFUGs. The Himalayan Grassroots Women’s Natural Resource Management Association Nepal, established in early1998, which is an NGO dedicated to strengthening the role of women at the grass-roots level in sustainable natural resource management -mostly community forestry.

There are some outstanding issues to be solved related to community forestry. There is a need for proper coordination among local government, province and federal governments regarding the proper running of community forestry. Most importantly, the information system on community forestry is urged right from handing over to the utilization of forest products and the sharing of monetary and non-monetary benefits. In addition, the contribution of community forestry in gross domestic products (GDP) should be calculated through the Central Bureau of Statistics under the National Planning Commission. Further, sound coordination among community-based forestry and private and family forestry on production should be promoted. A multi-stakeholder platform is needed to coordinate planning the program and monitoring its activities at the forest division level, local government and province government level. Similarly, a high-level federal forests and environment sector coordination committee is useful for planning and budgeting to achieve the mission' forestry for prosperity. Further, the government should re-structure the RatrapatiChure Conservation Program and involve concerned province FECOFUNin social mobilization endeavors. Forest enterprises must be started by clustering community forest user groups based on the landscape and product categories.

There is an urgent need to answer the frequently asked questions by stakeholders regarding scientific forest management. Firstly, the name of 'scientific forest management' should be changed as silviculture based forest management. Secondly, orientation to all users of concerned sites must be a prerequisite of forest management. Further, the collection of dead and dying trees only is not sound forest management but overall treatment must be carried out with justification. To foster forest management, there are some key points to be followed. Such as follow silviculture based forest management having the consent of concerned users by regulators, managers and facilitators must regulators, managers and facilitators must give proper attention on locals and their sentiment on biodiversity, cultural sites, meaningful participation of female users right from selection of forests, boundary survey, block resource assessment, decision making, minimize clear-felling and harvesting, justify the rationale of forest road and fire lines and forest road construction timely, and conduct plantation and fire control mission, provide employment for locals as well as carry out monitoring and reporting as well as public auditing activities. Promulgation of Nepal Foresters Council Act for quality control of foresters and forest management activities must be done in the initiation of the government as has committed in the forest policies.

Community forestry has become an appropriate way of managing various forest landscapes. The decentralized policy and participatory approach for protection, promotion and silviculture based utilization of the forests and generating funds and spending the budget as per the decision of the user groups are major social binding and blending with technical aspects to make successful and popular of the community forestry in Nepal.

Paudyal, Former Chief of Community Forestry Division, Department of Forests and can be reached at bijayarajpaudyal711@gmail.com