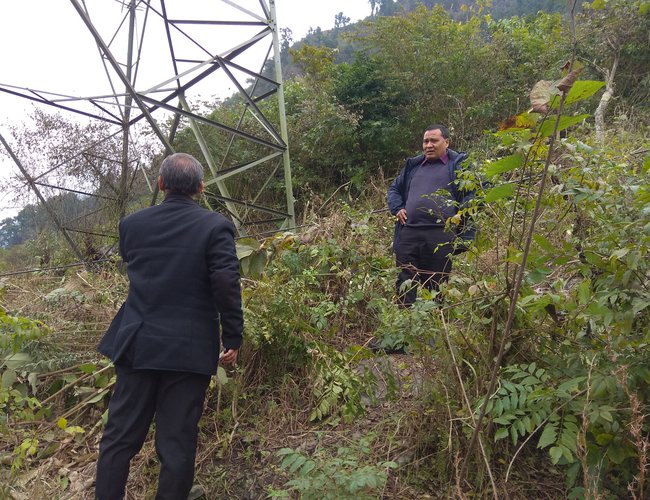 For Managing Director of Nepal Electricity Authority Kul Man Ghising, every moment matters. From managing financial crunch faced due to industrial lockdown and decrease of supply to complete the transmission lines and ongoing power projects, MD Ghising has issue after issue to handle.

He has been going from place to place and sector to sector to supply interrupted quality electricity to consumers. MD Ghising has shown that if there is a will, there is a way. After successfully ending 20 years of load shedding and completing a number of transmission lines, Ghising is now moving with an objective to make electricity supply qualitative, reliable and cheaper.

With the backing of Minister for Energy, Water Resources and Irrigation Barshaman Pun, MD Ghising is now working to raise fund to start the construction of Dudhkosi Storage Hydropower project.

In the meeting, the head of division Shree Krishna Nepal and Managing Director of Nepal Electricity Authority Kul Man Ghising spoke on various aspects of the project with the development partners.

Division chief Nepal said that the construction of storage project is the priority of Nepal and Dudhkosi Storage Project is comparatively attractive and cheaper. He urged development partners to invest in the project.

During the discussion MD Ghising presented the current status of the project, importance of the storage project, cost and structure of investment. MD Ghising said that the bank’s representatives expressed their preliminary consent and requested concrete proposal through Ministry of Finance.

During the meeting ADB offered up to $555 million dollar and EIB $550, AIIB $300 million and ADB’s Private Sector Investment Mechanism up to $200-300 million. MD Ghising said that it can completely invest in one of the sectors out of Hydromechanical, Electromechanical or Transmission.

The government in its policies and programs announced the start of the construction of the project giving priority. Minister for Energy, Water Resources and Irrigation Barshaman Pun announced implementation of Dudhkosi project as a national priority project during his visit to project site in December.

Asian Development Bank will take the lead of the project. Under the grant assistance of ADB, the detailed project design is currently underway. MD Ghising said that the construction of the project needs to start soon to maintain balance in power supply in the country and to export remaining power to the neighboring country. He said that the DPR is now in the final stage. Out of the storage projects in Nepal, Dudhkosi is comparatively cheap and attractive due to energy generation. He said that we have conveyed these facts to the representatives.

The project will generate 3,44,3000000 units of energy. Out of this, 135800000 units during the winter and remaining in summer. The electricity generated by the project will be evacuated to national grid through Sunkosi-Dhalkebar 400 kV transmission line.

A 220-meter dam will be built to create storage which will expand 17 kilometre in Dudhkosi, 8 kilometre in Rawa River, 5, 5 kilometre in Thotne Khola. The water will be discharged through 13.30 kilometre tunnel to powerhouse. The road to the project site is almost ready now.

For MD Ghising, the focus now is to manage the necessary fund for Dudhkosi Storage Project because this is cheaper and close to the load center.

NEPAL ELECTRICTY Reliability And Quality By A Correspondent 2 days, 20 hours ago