Divided since the promulgation of the constitution in 2015, signatories of the 12-point agreement have finally come together against the facilitator of the current change 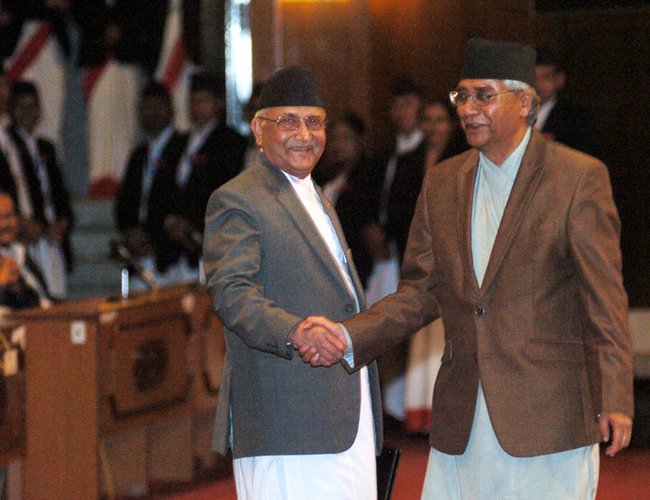 Following years of bickering, signatories of the 12-point agreement, which was facilitated by India in 2005, finally came together to forge consensus against their facilitator.

Harping on the unprecedented and historical unity on the constitution amendment bill at the lower and upper houses, Nepal Communist Party, Nepali Congress, Rastriya Janta Sanghiya Party and other fringe communist parties voted unanimously on a bill to incorporate a disputed territory claimed by India and Nepal in a new map.

After passing the Constitutional Amendment Bill, revising the Coat of Arms amending the country's map to incorporate Lipulekh, Kalapani and Limpiyadhura through national consensus by the House of Representatives (HoR) and National Assembly, Nepali political leaders united to challenge India asking it to vacate the territory claimed by Nepal.

For the first time since the promulgation of the new constitution in 2015, all the national political leaders, including those from the Madhesh-based parties, saw over 60 people killed and thousands of other injured over their call to oppose the constitution, cast their vote in favor of the bill.

Leader of newly united JRSP Rajendra Mahato, who was accused by mainstream parties as a traitor in the 2015 blockade, declared that Madheshis are more patriots than others as they have been guarding the borders.

He accused Prime Minister K.P. Sharma Oli and NC leader Sher Bahadur Deuba for their role in Mahakali Treaty. “Now, no one can question the intention of our party and Madheshis,” thundered Mahato.

Chairman Upendra Yadav echoed Mahato blaming Nepali Communist and Congress leaders for selling out the country. “You people sold the country and questioned our integrity and loyalty to the nation,” said Yadav, a main beneficiary of the current debate.

As Prime Minister Oli’s personal populist agenda prevailed, there were populist slogans among the leaders of major political parties.

Prime Minister Oli termed the unity historic to bring back the Nepali territory encroached by India, others echoed him. His political rival in the party Pushpa Kamal Dahal moved a step ahead of Oli demanding immediate withdrawal of the Indian Army from Nepal’s territory. “We have brought back our territory handed over by the Kings to India,” declared Prachanda. “Republic claimed the land surrendered by the monarchy.

Although all political leaders claimed that they had unprecedented and historical unity to pass the constitution amendment bill at the lower house, their actions and statements delivered at the parliament showed something different.

The border dispute is always a sentimental issue in every nation but it will be more sensitive in smaller countries like Nepal. With thousands of interactions at different levels and diverse relations at various levels including civilization, religion, culture and history, Nepal’s relations with India vis-à-vis India’s relations with Nepal are complex.

For Nepal’s radicals including communists whose ideology is globally fading, championing the sentimental issues like border dispute is a compulsion to survive in politics, which is understandable.

However, the jump of Madhesh-based parties and the Nepali Congress, which used to be soft in relation to India, remains mysterious. Although backing Oli’s agenda helped them to improve their image, their actions also supported the move to vulgarize the relations with India.

Leaders of the Nepali Congress, who are regarded as moderate political forces, even used more anti-Indian remarks to beat PM Oli and Prachanda. “India has to vacate Nepali territory,” they demanded.

Despite many differences among them, their commonness is being the signatory of the 12-point agreement. This may be the reason all parties came together forging national consensus.

Although mixing diplomacy with politics will have a long term implication in the state to state affairs, politicians with short term political gains do not mind to use this agenda to remain in power.

CPN (Maoist Center), Decides To Give Full Shape To Cabinet At Earliest By Agencies 4 hours, 44 minutes ago

UML POLITICS Divided We Stand By A Correspondent 2 weeks, 1 day ago

MPs Have No Choice Other Than To Vote Deuba By Keshab Poudel 2 weeks, 2 days ago