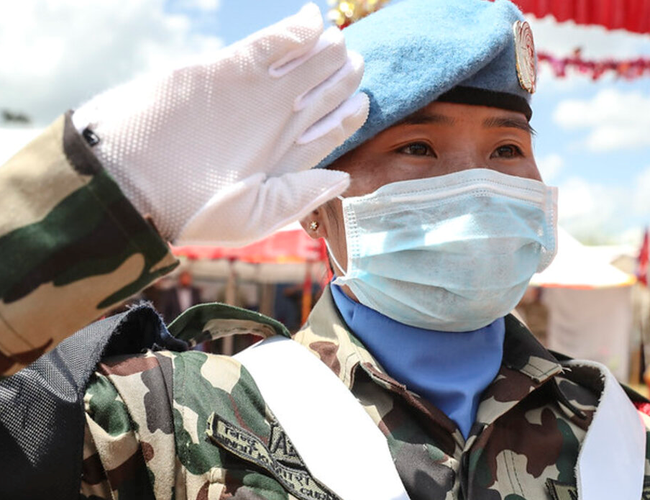 “I’m very proud to be a part of UNMISS,” says Captain Chunadevi Paudel, a peacekeeper from Nepal, upon receiving the United Nations medal for her commitment to the cause of durable peace across South Sudan. “I think what I have been most struck by are the people of South Sudan. They have been through so much, but their resilience and positivity have touched every interaction I have had in the course of this year,” she continues.

This is Captain Paudel’s first peacekeeping mission and she left behind her young son to wear the iconic blue beret. “Staying away from one’s children is hard,” she reveals, “but at the end of my deployment, I can truly say that I have learnt a lot—from the host community and from all my fellow peacekeepers from different countries.”

Captain Paudel is one of 850 Nepalese peacekeepers who received the UN medal today for their immense contribution to the mission’s mandate delivery during a most challenging and extraordinary time, when conflict and displacement in the world’s newest country have been exacerbated by the spread of COVID-19.

This Nepalese battalion has, in the past 11 months, conducted operational activities in some of the most sensitive areas of South Sudan, especially in the Equatorias, undertaking diverse tasks such as force protection, community engagement and enhancing UNMISS’ situational awareness. Most importantly, they have protected civilians and prevented conflicts from escalating.

Addressing the parade, Special Representative of the UN Secretary-General and Head of UNMISS, David Shearer, commended the awardees for their professionalism, commitment and dedication. “I would particularly like to thank you for the support you provided to reinforce Pibor, during a period of intense intercommunal violence and large-scale displacement of civilians. As such, you the Battalion, should be justifiably proud of your efforts to create positive and meaningful change for the people of South Sudan,” said SRSG Shearer.

For his part, Colonel Saroj Kumar Adhikari, Contingent Commander for the Nepalese battalion reiterated his country’s commitment to United Nations Peacekeeping. “Our country has a long history of contributing troops to the United Nations. As peacekeeper what we try to bring to all our deployments is the ability to understand the on-ground situation, respect the rule of the land, be dedicated to the mission’s objectives and always have a sense of pride in the duties we perform,” he stated. Additionally, Colonel Adhikari paid tribute to the generous spirit of South Sudanese communities.

As one of the first medal parades to be held in Juba following the outbreak of COVID-19, it has been a special day, not just for those being honored, but for everyone attending and a testament to the peacekeeping mission’s commitment towards ensuring a just, equitable and sustainable peace for all communities in South Sudan.

Nepal’s first deployment to UNMISS was in 2011; since then its commitment has grown to over 2000 personnel including military observers, staff officers, two Battalions, the High Readiness Company, as well as a Formed Police Unit and Individual Police Officers.

Nepal Army Collects Over 30,000 KG Of Wastes From Major Mountains By Agencies 18 hours, 38 minutes ago