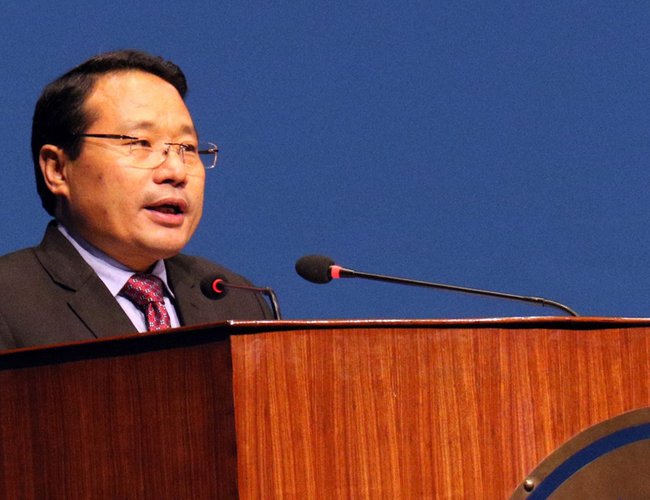 Minister of Energy, Water Resources and Irrigation Barshaman Pun Ananta has directed Nepal Electricity Authority (NEA) not to collect penalties from the customers due to failing meter reading.

Minister Pun summoned acting Managing Director Lekha Nath Koirala and deputy executive director and head of Customers and Distribution Directorate Harraj Neupane at the ministry and directed them to immediately take the necessary measures not to change the penalty.

Following the direction of minister Pun, NEA has directed all NEA’s counters not to charge fine to the customers during the period of COVID-19 lockdown.

Due to lockdown, meter readers did not visit the home of customers were asked to pay penalties. During the meeting, minister Pun directed NEA’s high officials to refund the penalty collected from customers.

Minister Pun has directed the officials to adjust the penalty in customers next month's bill if they cannot refund now. He urged customers to read the meter themselves and paid the money as per the meter numbers. Acting managing director Koirala said that NEA has already implemented the direction given by the minister. “I have already directed distribution centers all over Nepal not to charge a penalty,” Koirala reportedly told to minister Pun. He also said that a public notice regarding the revoke penalty has already published.

Minister Pun also directed NEA’s management to constitute an Immediate Response team to fix the technical problems in the distribution system and solve the current frequent disruption in the electricity. Minister Pun said that over 9 million students are currently taking online classes and disruptions in the supply of electricity can disturb their education.

He also directed management to fix even there come minor technical problems. He said that the current leadership of NEA should take all necessary measures till the appointment of new leadership in NEA.

Bangladesh Is Ready To Buy Electricity Generated In Nepal: Ambassador Chowdhury By Agencies 2 hours, 34 minutes ago