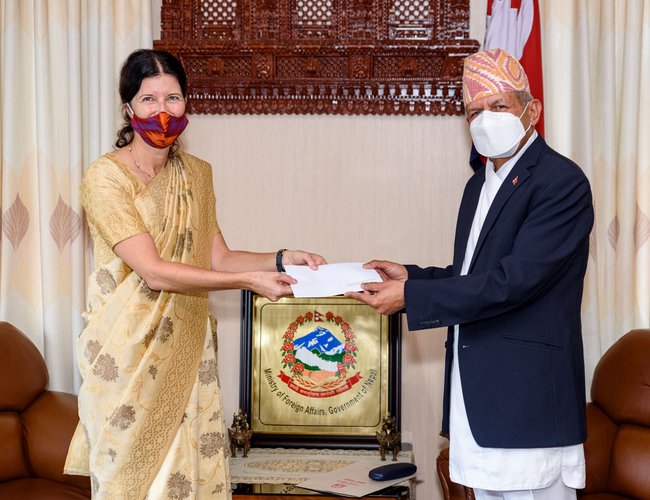 Spannuth Verma, a German national, arrived in Kathmandu on 15 September 2020 to take up her new assignment as UNHCR Representative in Nepal.

Upon resuming Office, Spannuth Verma said “The Government and people of Nepal have an impressive tradition of protecting those who are forced to flee persecution. The generosity of Nepal is acknowledged by the international community, especially in light of its own challenges of resources. I look forward to advancing with the Government and other UNHCR partners this important agenda in a spirit of collaboration, law and compassion”.

Spannuth Verma’s journey of serving the cause of refugee protection through UNHCR has now spanned almost 25 years. She has served in various international protection and legal positions in Morocco, Malaysia, Indonesia, Republic of Northern Macedonia, Bulgaria and at UNHCR Headquarters in Geneva in the Division of International Protection, Asia and Africa Bureaus.

Spannuth Verma practiced law in the courts of Hamburg, Lübeck and Schwerin in Germany before taking her expertise to the UN Office of the High Commissioner for Human Rights in New York. She attained her higher and post-graduate Law Degree from the University of Freiburg and Hamburg, Germany and in 1995 obtained her license to practice as a Judge in Germany.

Spannuth Verma is married to Dr. Sunoor Verma, a heart surgeon and an international development specialist. They have two daughters. Along with an international civil service career, she still carries in her heart the city of Hamburg where she was born and educated.

Germany Decides To Continue With The Bilateral Development Cooperation With Nepal Beyond 2023 By NEW SPOTLIGHT ONLINE 1 hour, 2 minutes ago

Nepal Backs Away From US State Partnership Program: Indian Scholar, China Commends Nepal's Decision Not To Move Ahead On The SPP: CGTN By NEW SPOTLIGHT ONLINE 1 day, 23 hours ago