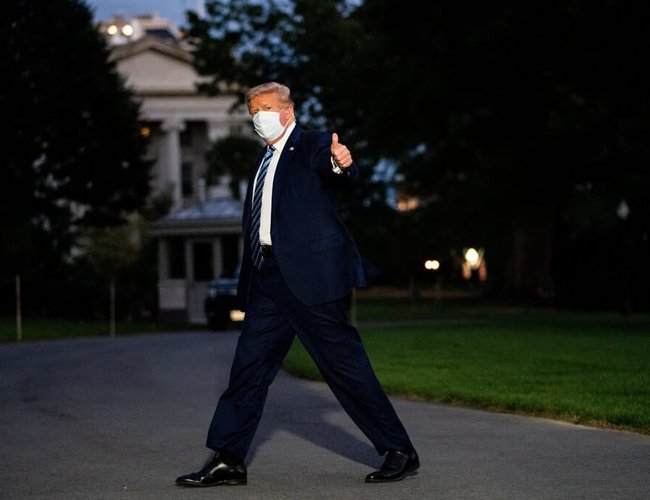 US President Donald Trump has left hospital, three days after being admitted with Covid-19, vowing to be back on the campaign trail soon.

He flew for the short trip back to the White House on the presidential helicopter Marine One.

More than 7.4 million cases of Covid-19 have been recorded in the US. The virus has killed nearly 210,000 Americans.

Questions remain over the seriousness of Mr Trump's illness after a weekend of conflicting statements. The true scale of the outbreak at the White House remains unclear.

"Thank you very much everybody," he said, ignoring questions from the media, including one reporter who asked: "Are you a super spreader, Mr President?"

Following the short helicopter ride, Mr Trump was pictured alone on the Truman Balcony of the White House. He removed his protective face mask, before giving a thumbs-up and a military-style salute.

A couple of hours later, he tweeted a campaign-style clip of his return set to stirring music.

Shortly before leaving hospital, the president tweeted: "Will be back on the Campaign Trail soon!!! The Fake News only shows the Fake Polls."

Mr Trump's diagnosis has upended his campaign for a second term in office, less than a month before the Republican president faces Democratic challenger Joe Biden in the White House election.

Telling Americans not to fear the disease in an earlier tweet on Monday, Mr Trump added: "We have developed, under the Trump Administration, some really great drugs & knowledge. I feel better than I did 20 years ago!!"

Speaking to reporters on Monday, the president's doctors avoided specifics of his care, but said he was doing well and would receive another dose of antiviral drug remdesivir before being discharged.

The president's discharge comes as more new cases have been reported among White House staff.

Many of the people who have tested positive around President Trump attended a meeting at the White House on 26 September that is being scrutinised as a possible "super-spreader event".

The White House has not revealed how many staff members have tested positive since Mr Trump's own diagnosis.

The latest coronavirus case to emerge from that event, at which the president unveiled his nominee for the US Supreme Court, is a Christian minister.

Before attending the White House Rose Garden gathering, Pastor Greg Laurie was also with US Vice-President Mike Pence at a prayer march in central Washington DC.

The Californian minister is said to be experiencing "mild symptoms" of Covid-19, reports the BBC's US partner CBS News.