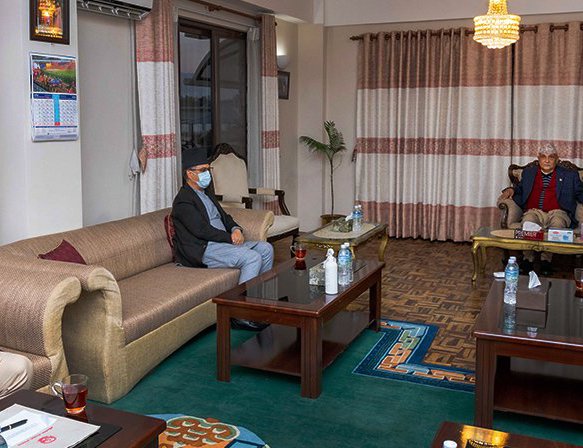 A meeting of the Council of Ministers held at the official residence of Prime Minister KP Sharma Oli in Baluwatar on Tuesday had decided to recommend President Bhandari for the issuance of the ordinance, Minister for Communication and Information Technology and government spokesperson Parbat Gurung confirmed after the meeting.

The President issued the ordinance on the basis of the recommendation of the Cabinet meeting held today, Joint Secretary and spokesperson Badrinath Adhikari at the Office of President also confirmed.

According to the Office of the President, President Bhandari issued the Constitutional Council (Functions, Duties, Rights and Procedures) Ordinance, First Amendment, 2077 B.S on the recommendation of the Council of Ministers pursuant to Article 114 (1) of the Constitution of Nepal.

The meeting held at the Prime Minister’s Official Residence in Baluwatar hold discussions on filling up the vacancies in several constitutional bodies, including the Commission for the Investigation of Abuse of Authority (CIAA), Election Commission (EC), National Human Rights Commission (NHRC), National Women’s Commission (NWC) and National Dalit Commission among others.

Ganesh Timalsina, Chairman of the National Assembly and one of the members of the Constitutional Council, said, “The meeting today has started discussion over the longstanding vacancies at various constitutional bodies. However, no decision on appointments was made.”

Prime Minister KP Sharma Oli’s Press Advisor Surya Thapa said, “The meeting today was focused on the issues including the functions of the Constitutional Council and potential candidates for the vacant posts in several constitutional bodies.”

According to Sapkota’s press advisor Shreedhar Neupane, the Speaker didn’t attend the meeting because there was lack of coordination between the Chairman and Council’s members. The meeting was called without preparation and setting up agendas for the meeting, he added.

The meeting was also called earlier on Sunday. However, the meeting could not convene after two members, Deuba and Sapkota, were absent.

Over 93 Percent Results Of Local Poll Announced, Balen and Chiribabu Leading In Kathmandu And Lalitpur Respectively By Agencies 1 day, 21 hours ago