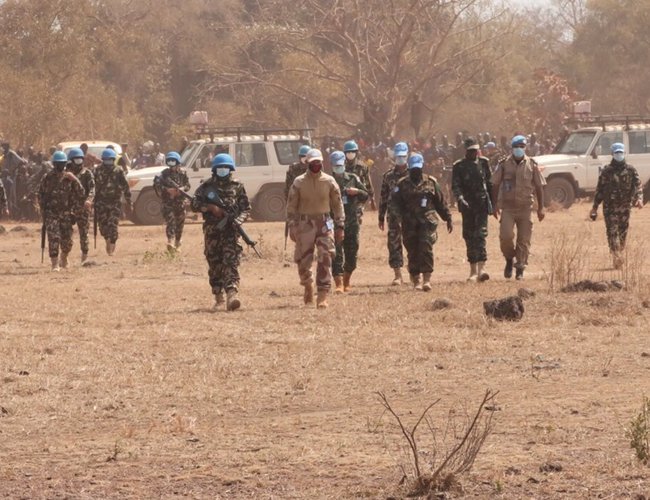 The United Nations Mission in South Sudan is planning to extend the stay of Nepalese peacekeepers in Cueibet County in Lakes State. Their presence has been credited for the current reduction of tensions between the frequently fighting Waat and Ayier communities.

The Nepalese peacekeepers, who have spent a month in the area, recently received information about both rivalling communities planning to attack each other, with both presumable seeking “justice” for earlier cattle raids and killings. The Nepalese battalion acted on the early warnings, and so far, they have managed to deter further intercommunal violence.

“Our troops have been deployed here to protect civilians and bring peace, together with government officials and the national army. We shall keep them here if the community still wants them,” said Lieutenant General Shailesh Tinaikar, the peacekeeping mission’s Force Commander, while on a brief visit to the area.

Women have suffered badly from the recent outbreaks of violence. “We don’t really understand what is happening here anymore. During our liberation and independence struggle, women and children were never targeted, but that has changed. We are now being specifically targeted and abused,” said Allen Ajak, a female resident of Cueibet.

John Chiec Dut, a youth leader in the area, believes that impunity is the biggest challenge, as it makes the vicious circle of violence endless.

The presence of UN peacekeepers does seem helpful, however. As they arrived on the scene, so did relative peace and calm.

“Local leaders tell us that the security situation is controlled now. The warring communities have been separated and kept far apart from each other by our peacekeepers patrolling the area,” said Kwame Dwamena-Aboagye, head of the UNMISS field office in Rumbek.

Nepal, the UN’s 4th largest contributor of peacekeepers, currently deploys more than 2,000 military and police personnel to the UN Mission in South Sudan.

Nepal Army Collects Over 30,000 KG Of Wastes From Major Mountains By Agencies 21 hours, 52 minutes ago