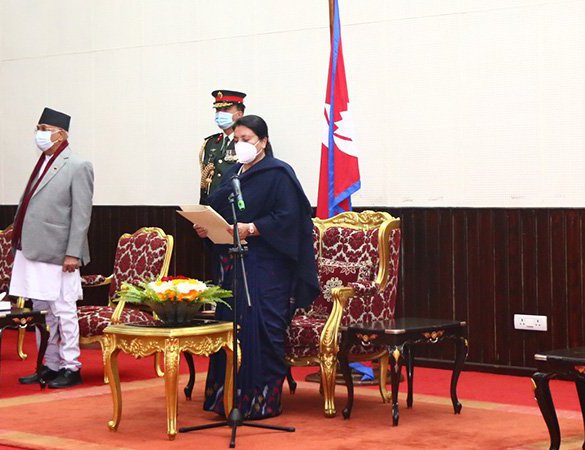 President Bidya Devi Bhandari administered the oath of office and secrecy to newly appointed eight Cabinet ministers at a special ceremony organised at the Sheetal Niwas on Friday evening.

Six days after seven ministers representing the Prachanda-Nepal faction of the ruling Nepal Communist Party tendered their resignation en masse protesting against the dissolution of the House of Representatives, Prime Minister Oli also relived two others from his Cabinet this evening.

They included Minister for Youth and Sports Jagat Bishwakarma and Minister of State for Industry, Commerce and Supplies Moti Lal Dugad.

Likewise, portfolios of six sitting ministers have been altered in the reshuffle.

Of the newly appointed ministers, Rayamajhi has been given the responsibility of Energy, Water Resource and Irrigation Ministry, Thapa of Drinking Water, Sah of Urban Development and Ale of the Forest and Environment Ministry.

Similarly, Thagunna has become the Minister for Federal Affairs and General Administration, Chaudhary Minister for Labour, Employment and Social Security, Tamang Minister for Youth and Sports and Mahato Minister for Women, Children and Senior Citizens.

Bimala Bishwokarma has been appointed Minister of State for Industry, Commerce and Supplies.

Land Management Minister Padma Aryal has been given the responsibility of the Ministry of Agriculture and Livestock Development.