Inking an agreement to provide temporary employment for Nepali youths, Israel has come to support the revival of Nepalese economy 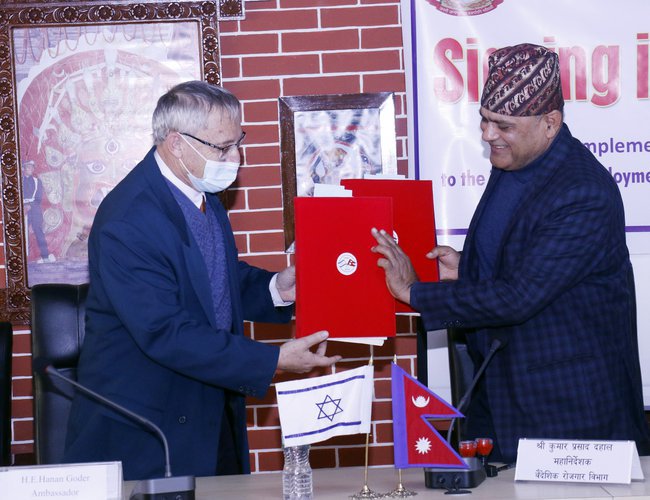 At a time when Nepal has been facing a major economic crisis following shrinking demands of Nepalese workforce in foreign countries due to COVID-19 pandemic, the recently signed agreement between Nepal and Israel is highly significant. Signing the agreement to allow 500 Nepalese youths to work, Israel government has shown its concern in Nepal’s development and prosperity.

'Implementation Protocol' has been signed between Nepal and Israel recently for the implementation of 'Agreement related to temporary employment of Nepali workers in labour market of Israel'. The latter agreement was signed on September 30, 2020.

They would get service and facilities as per the labour-related laws of Israel. The Nepali youths would go for employment through government-to-government of both countries. Israel is one of the attractive destinations for overseas employment. There are around 2,500 Nepalis in Israel, according to Nepali Embassy in Israel.

According to the Ministry, it has been made systematic and transparent as much as possible as the government is sending the skilled and capable workers to Israel.

On the occasion, Minister for Labour, Employment and Social Security, Gauri Shankar Chaudhary, said that new dimension has been added in bilateral relation of Nepal and Israel with the signing of the protocol.

Minister Chaudhary expressed a belief that diplomatic, as well as labour relations between the two countries, would be cordial.

He also urged the Israeli government to provide opportunities of employment to Nepali youths in other sectors not only as a caregiver.

Nepali Ambassador to Israel, Dr Anjan Shakya, said that she was actively involved to open labour market of Israel to Nepalis since she reached Israel as the Nepali Ambassador and it has been successful.

According to the protocol, 500 Nepali men and women will get employment in Israel in the first phase. Nepali youth will receive benefits in accordance with Israeli labour law.

This is a government-to-government agreement to send Nepali people to Israel as auxiliary workers in caregiving houses of nursing homes. This is entirely a new MoU which outlines a transparent process of recruitment. No private sector involvement is envisioned in this process, said DG Dahal.

“First, we will have to formulate internal working procedures by specifying the application, selection and requirement process. The department has already proposed elements of such procedures with the Ministry, the procedures will be finished soon,” he said.

The Department will launch online application system so that all eligible Nepali youth can apply themselves without the help of any external person.

There are many caregivers in Israel and most Nepalis go there as caregivers. Israel is considered an attractive destination for foreign employment in terms of income, social security and employment security for workers.

Through a video conference, Dr. Anjan Shakya, Nepal's Ambassador to Israel, said that she had been trying to open the labour market for Nepalis since she arrived in Israel as an ambassador and today she achieved the success. Mentioning that Israel is an attractive destination for foreign workers, she said that Nepalis will be able to work in Israel with dignity.

On the occasion, Israeli Ambassador to Nepal Goder said that Nepali youths would get the same services and remuneration without any discrimination as Israeli citizens.

He expressed his hope that the process to send Nepali workers to Israel would begin at the earliest by completing the required procedures.

At a time when Nepalese youths in major working destinations, except Republic of Korea, have been working in lower rate, this agreement helps Nepalese youths to get the salary as per the Israeli equal pay system. Under the earn and learn program, off springs of small farmers have already shown how to apply the knowledge acquired during their training in Israel and earn money helping to transform the agriculture sector.

Korean INGO UHGHF To Buil A School In Dailekh By Agencies 16 hours, 47 minutes ago