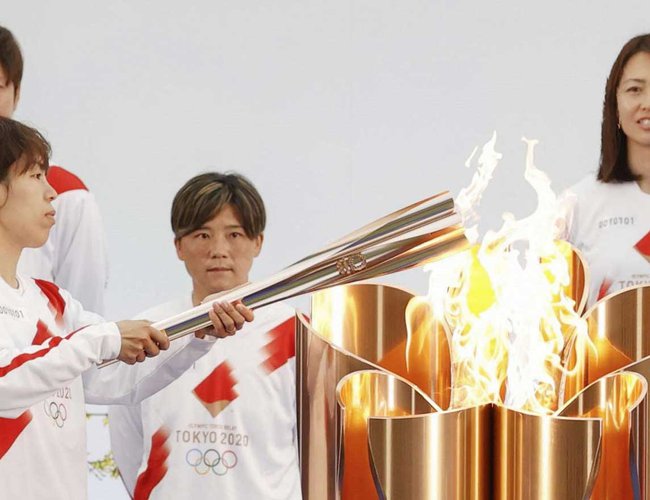 The Olympic torch is finally making its way around Japan after a yearlong delay due to the coronavirus pandemic. The relay is expected to draw crowds throughout the country as it passes through all 47 prefectures and will be the first test of the anti-virus measures put in place for this summer’s Games reports NHK.

The torch relay kicked off Thursday morning in the northeastern prefecture of Fukushima, which was devastated by the 2011 earthquake, tsunami and nuclear accident.

"I hope the Olympic flame of the Tokyo Games will raise hope around Japan with its powerful and warm light," said Hashimoto Seiko, Tokyo 2020 President, at the departure ceremony.

According to NHK, over the coming month, about 10,000 people will carry the torch, including some who were forced to evacuate from their homes due to the 2011 disaster.

The 121-day relay is scheduled to finish at the new National Stadium in Tokyo on July 23, the day of the opening ceremony

"I ran in the hope of showing the world how much energy the people in the disaster-hit areas have," said Endo Shu. He is from Namie Town, Fukushima Prefecture, most of which was designated as a no-go zone by the government.

NHK reports that some of the torch runners were forced to evacuate in 2011 and are still unable to return home.

The start of the torch relay usually marks the beginning of Olympic fanfare. This time, though, the mood is subdued because of the pandemic. For organizing committee officials, the priority is to avoid infection clusters related to the event. They are urging fans to watch a livestream of the relay from the safety of their homes.

The officials are asking people who do plan to attend in person not to gather in large groups or cheer loudly. They say they may suspend the relay if crowds get too big. They are also asking the runners to refrain from dining out for two weeks before the start of their leg.

But concerns about the pandemic are not limited to the organizing side. More than 90 participants, including several high-profile figures, have pulled out of the relay so far.

Event organizers are asking people who attend the relay in person to not form large groups or cheer loudly.

And the event’s cautious atmosphere seems to be dampening public enthusiasm for the Games in general. More than half of the respondents to a recent NHK poll said the Olympics and Paralympics should have limited or no attendance. Over 30 percent said they don’t want the Games to go ahead at all.

Event organizers chose Fukushima as the starting point of the relay to highlight the region’s recovery from the disaster a decade ago. But many residents — some of whom are still living far from home — see little cause for celebration.

Watanabe Hidemasa is still an evacuee, over a decade after the disaster. He says it would be inappropriate for the Games to be associated with regional recovery.

"It feels too early to hold them," he says. "I want the priority to be on providing relief to people who have been evacuated."

Watanabe Hidemasa has been unable to return home to Okuma Town, Fukushima Prefecture, more than 10 years after the nuclear accident.

And the recent decision to ban overseas spectators has only raised further questions about the viability of the Olympics. More than 600,000 tickets will now have to be refunded, and the lack of inbound tourism is expected to set the Japanese economy back by $1.3 billion.

Prime Minister Suga Yoshihide remains steadfast in his commitment to the summer spectacle.

"The torch relay is a valuable opportunity to show the public that the Olympic and Paralympic Games are approaching," he told reporters on Thursday. "I would like momentum to build in every region."