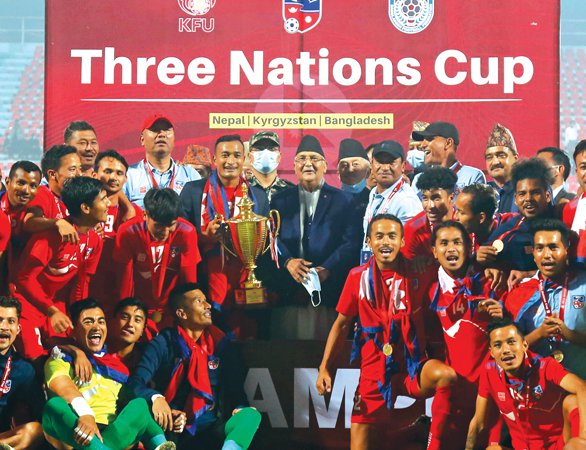 Nepal lifts three nations cup defeating Bangladesh 2-1. Nepal entered the final after playing goalless draws against Krygryzstan Olympic Team and Bangladesh in the league round. Likewise, Bangladesh made it to the final with a 1-0 win over Kyrgyzstan.

The title winner host Nepal received US $ 5,000 and second position Bangladesh satisfied with US $ 3,000.

Prime Minister KP Sharma Oli was present at the stadium to witness the national football team clinching their fifth international titles. Premier also presented the trophy and medals to the players of both winning and losing team.

Nepal won their first title of SAG in 1984 in Kathmandu and they bagged the 1993 SAG football title. After that, they won two international titles in 2016. They won Bangabandu Gold title in January in Bangladesh and clinched their fourth title after winning AFC Solidarity Cup in September 2016.